Heavy rain forced the first match of the day between Southern Punjab and Central Punjab to be abandoned whereas the second game between Northern and Khyber Pakhtunkhwa had to be reduced to 16 overs a side in which Northern beat Khyber Pakhtunkhwa by seven wickets to move top of the table in the ongoing National T20 Cup being played at Iqbal Stadium in Faisalabad. 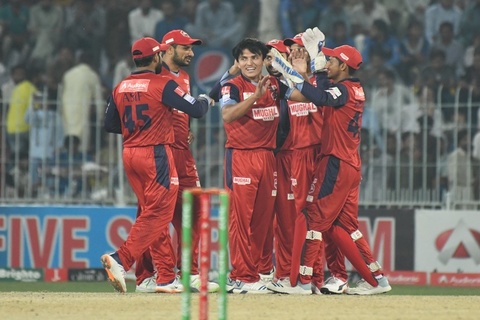 Audionic Presents Zong 4G National T20 Cup      Iqbal Stadium
Northern beat Khyber Pakhtunkhwa by seven wickets (DLS method) in the 12th match of the ongoing National T20 Cup at Faisalabad’s Iqbal Stadium.
In a rain-affected contest, reduced to 16 overs per side, Imad Wasim put Khyber Pakhtunkhwa into bat.
The decision paid dividends as Musa Khan wrecked havoc in his opening spell and  reduced Khyber Pakhtunkhwa to 15 for three in 3.1 overs.
A mature effort by KPK captain, Mohammad Rizwan and Iftikhar Ahmed took Khyber Pakhtunkhwa’s total to 134 for eight in 16 overs.
Rizwan continued his brilliant form with the bat and scored 52 off 35 balls with seven fours.
Iftikhar’s 20-ball 31 – which had three sixes and a four – was the other notable contribution.
Northern’s chase got off to a flying start with the opening pair of Umar Amin (39 off 28) and Ali Imran (34 off 23) helping their side to 65 without a loss in seven overs before rain interrupted the proceedings.
With the match reduced to 12 overs, the target was revised to 101 and Northern chased it down with three balls spare.
The victory put Northern at the top of the points table with six points, coming from three wins in four matches.
Earlier in the day, Punjab Derby abandoned without a ball bowled. Central Punjab and Southern Punjab shared a point each as the 11th match of the National T20 Cup had to be called off due to wet outfield caused by torrential rain.