Pakistan Baseball Team will be competing against the strong, Korean Baseball Team in the second group fixture of BFA Asian Baseball Championship 2019 which is being played at Taichung, Chinese Taipei. 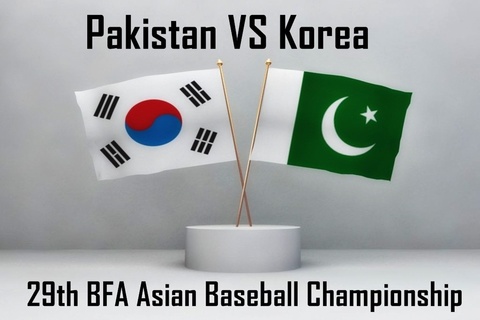 Pakistan Baseball Team will be taking on their counterparts from Korea in their second group fixture today in the 2019 BFA Asian Baseball Championship which is being held in Taichung City of Chinese Taipei.

This mega international event has been organized by Baseball Federation of Asia (BFA) into its 29th successful edition which is featuring National teams of six Asian sides that includes: China, Pakistan, Korea, Japan, Philippines, Hong Kong and Sri Lanka.

Pakistan has been grouped with China, Korea and Philippines in Pool B while Sri Lanka, Japan and Hong Kong are clubbed into Pool A.

The world No. 24, Pakistan team qualified for 29th BFA Asian Championship, which also serves as an Olympic qualifier, after finishing second in the West Asia Baseball Cup that took place in Colombo in July this year.