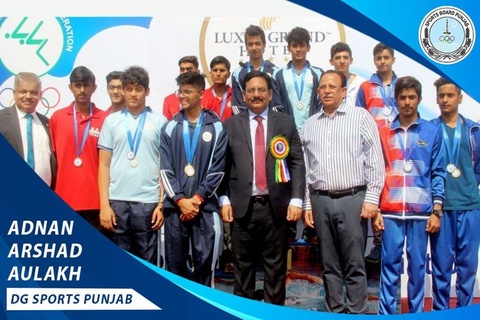 Punjab Swimming Association in collaboration with Sports Board Punjab provided swimmers with the opportunity to take part in their most favored sport by competing against each other in theri respective categories so as to win top honors in National Boy's Age Group Swimming Championship, that proved to be its 24th successful edition.
Among several talented participating swimmers, the ones from Punjab completely dominated the event by creating three new national records. Namely Punjab’s young swimmers - Zain Younis, Ibraheem Rasheed and Daniyal Ghulam Nabi stood victorious.
Zain Younis created new national swimming record in 50 Meter Freestyle U-16 event with the timing of 25.88 whereas Daniyal Ghulam Nabi successfully created a new national record in U-14 200 Meters Breaststroke category as he consumed the time of 2:45.36 beating the previous national record of Zeeshan Abbas - 2:50.17, established in 2017.
While the two more national records were established on the second day of the championship when Amman Siddiqui of Sindh covered his distance of 4:50.97 beating the previously established record of 4:56.21 in 2016 by Ayyan Asif in the class of U-14 Freestyle.
Director General Sports Punjab, Adnan Arshad Aulakh inaugurated the event alongside SBP Director General, who later distributed medals among the high achievers of the championship.  Adnan Arshad Aulakh was also presented with a souvenir by Chief Patron, Punjab Swimming Association, Zoraiz Lashari.