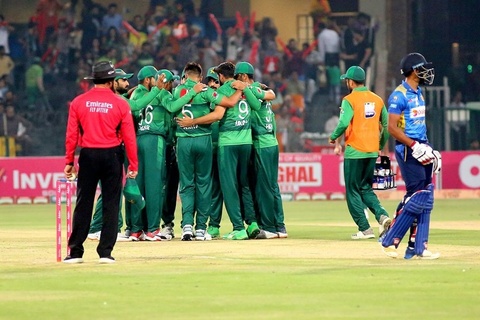 Having already lost the series, Sarfraz Ahmed and his men badly needed a consolation win but that did not happen. Sri Lankan Wrist-spinner, Wanindu Hasaranga once again tormented the hosts with a three-wicket burst.
Chasing a modest 148, the hosts had a horrifying start as out-of-form opener Fakhar Zaman was bowled by paceman Kasun Rajitha for a golden duck on the very first ball of the innings.
Left-handed, Haris Sohail (52 off 50) then joined Babar Azam (27 off 32) as they launched the rescue mission with Pakistan reaching 76-1 in the 12th over. At this stage, however, Sri Lanka secured the key wicket of Babar who was caught by wicket-keeper Sadeera Samara­wick­rama off fast bowler Lahiru Kumara. Babar’s departure was a big jolt for Pakistan as the required run-rate gradually increased. At 94-2 in the 16th over when Haris failed to read a wrong’un from Hasaranga who bowled a ball wide outside the off stump, and was stumped, it set alarm bells of the whitewash ringing for Pakistan.
Imad Wasim (3), the highest scorer for Pakistan in the second game, went cheaply caught by Hasaranga at long-on off Kumara. Asif Ali (1) was out second ball off Hasaranga after the batsman tried to hit out but was caught by Danushka Gunathilaka at long-on as Pakistan slumped to 104-5 in the 18th over.
Sarfraz’s (17 off 16) highly worrying struggle with the bat continued in this game as the skipper — trying to negotiate a googly from Hasaranga — was cleaned up. Pakistan now were in dire straits, needing a very tough 37 off the last two overs. Wahab Riaz (12 off 6) and Iftikhar Ahmed (17 off 8) tried their best get over the line but only ended up 13 runs short of Sri Lanka’s total of 147.
The wily Hasaranga who finished with excellent figures of 3-21, richly deserved the man-of-the-match award. His eight wickets in the three games earned him the man-of-the-series award too.
Earlier, electing to bat first for the third consecutive time in the series, Sri Lanka buoyed by a fighting half-century from debutant Oshada Fernando (78) and aided by half a dozen dropped catches from the Pakistani fielders, set a fighting target of 147-7 for the hosts.
However, the Islanders could not get off to an impressive start despite the dropped catches early on and were tottering at 3-30 by the end of five overs. Sarfraz dropped an easy catch of opener Sadeera Samara­wickrama off pacer Mohammad Amir but on the last ball of his over Amir clean bowled dangerous Dhanushka Gunathilaka for 8 at the total of 24.
With the addition of just six runs, Sri Lanka lost Samarawickrama (12) lbw to Imad. Amir then took his second wicket by dismissing Bankua Rajapaksha, caught by Asif Ali at deep area for just 3.
At this stage, a fine partnership between Angelo Perera and Oshada Fernando consolidated the Sri Lanka innings and they crossed 50-run mark in only 6.4 overs. However, at 57, Perera (13) was run out by Sarfraz after receiving a fine throw from Iftikhar. At 75, Sri Lanka earned another chance when their captain Dasun Shanaka could have been stumped in the 11th over off Imad but Sarfraz could not move swiftly enough to pull it off.
Shanaka and Oshada Fernando took the visitors to 100-4 in 14.3 overs. Fernando completed his 50 with a single to Wahab, consuming just 33 balls and cracking six fours and a six off Usman Shinwari. He also hit Amir for a fine six in the 17th over and then pulled Wahab to mid-wicket for his third six in the 18th over. But in same over, Wahab removed Shanaka for his 25-ball 12 runs when Fakhar held a fine running catch in deep cover area to end their 76-run fifth-wicket partnership of 60 balls, making it 134-5.
Amir further reduced Sri Lanka to 140-6, removing next man Lahiru Madushanka for just 1 as Iftikhar Ahmad held a fine catch at extra-cover. And on last ball of the innings, Hasaranga (6) was run out for stealing a risky single. But it must be noted that the Pakistani bowlers once again failed to take all ten wickets of the opposition.
Amir finished as the most successful bowler with three for 27 while Wahab and Imad took one each for 26 and 18 runs, respectively.
As the last T-20 match was about to begin, the stadium turned pink as Pakistan Cricket Board (PCB) joined hands with Pink Ribbon to create awareness about breast cancer for which a ceremony was held before the start of the match that was attended by Pakistan President, Dr. Arif Alvi and PCB Chairman, Ehsan Mani.
Sri Lankan Cricket Team have returned to Pakistan after a nearly two-year absence for three short-form cricket games: ODIs and the T20Is, among which the three ODIs have been played whose winners are being crowned the hosts, Pakistan Cricket Team while the Twenty20 Internationals winners stand as the visiting side, Sri Lankan Cricket Team.