Sri Lanka’s second-string side humbled Pakistan by 35 runs in the second Twenty20 International to seal the series and leave the hosts with only pride to play for in the third match of the series tomorrow at Gaddafi Stadium, Lahore. 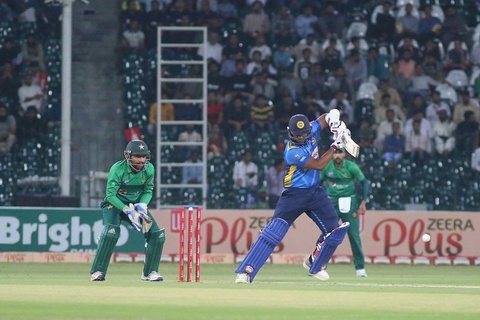 Pakistan-Sri Lanka Cricket Series (2019)      Gaddafi Stadium
The world’s top-ranked T-20 side, Pakistan once again lost against Sri Lankan team, that sealed the series win by defeating the hosts by 35 runs in second Twenty20 International match played yesterday.
The defeat would’ve been even more embarrassing if it hadn’t been for a 75-run partnership between Imad Wasim and Asif Ali with Pakistan at one stage reduced to 52-5 after a stunning three-wicket over by Wanindu Hasaranga as they chased 183.
For the Sri Lankans it was a memorable triumph. They dominated Pakistan for most stretches of the game, especially in their innings where Bhanuka Rajapaksa tore into the Pakistan bowlers with a 48-ball 77 after they elected to bat first.
Sri Lanka opener, Danushka Gunathilaka couldn’t carry his form from the first match and, courtesy Imad Wasim, departed after contributing a mere 15 runs.
Rajapaksa’s knock, however, was full of fireworks. The southpaw hit four fours and six sixes. Two of those sixes came in the 11th over in which leg-spinner Shadab Khan conceded 19 runs. Young fast-bowler Mohammad Hasnain was also battered by Rajapaksa when in the 14th over he conceded 17 runs with the former hitting him for two sixes again.
It was Shehan Jayasuriya who was on the other end during Rajapaksa’s onsl­aught against the Pakistan bowlers. Jayasuriya also played his part in Shadab and Hasnain’s expensive overs and put up a 62-ball 94-run partnership with Rajapaksa for the third wicket.
Rajapaksa, earlier, also teamed up with Avishka Fernando for a second-wicket 16-ball 25-run partnership which helped Sri Lanka get a good start after losing Gunathilaka. Dasun Shanaka’s 27 helped the visitors eventually post 182-6.
Out of the six dismissals Pakistan managed, only three were made by bowlers themselves with Fernando, Jayasuriya and Minod Bhanuka being run out. It was, however, leg-spinner Shadab Khan who sent back top-scorer Rajapaksa to the pavilion after the batsman failed to clear the field in an attempt to go for yet another big shot. Veteran pacer Wahab Riaz was the other wicket-taker after he cleaned up tailender Isuru Udana.
Pakistan’s innings was only 13 balls and nine runs old when opener Fakhar Zaman played an ungainly shot with the ball from Kasun Rajitha hitting the inside of his pad and crashing into the stumps.
Six balls later, Pakistan were dealt with yet another blow when they lost Babar Azam after the right-hander played on Nuwan Pradeep’s delivery into the stumps. Sarfraz promoted himself up the order sharing a 40-run stand with Ahmed Shehzad before Hasaranga turned the match on its head.
Imad’s quick-fire 47 raised Pakistan’s hopes of a miraculous victory but the all-rounder was dismissed lbw by Udana just when Pakistan were looking to press the accelerator. He hit eight fours during his 29-ball innings.
Wahab and Shadab came and went back in quick succession and Pakistan’s hopes of taking the series into the final game well and truly came to an end when Asif (29) departed midway through the 19th over.