The 2019 Model Soccer League successfully wound up with Tehmash Academy 2 claiming the title at Tehmash Khan Football Stadium in Peshawar. 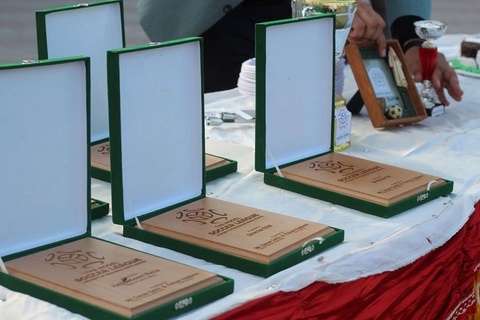 Model Soccer League 2019      Tehmash Khan Football Stadium & Academy
The two teams that made it to the grande finale of Model Soccer League 2019 stood Tehmash Academy 2 and Predator Football Club as they topped the chart with most wins against their opponent teams to come up front for the battle of the ultimate title of the tournament.
The final football action ended with a 3-1 score line which stood in the favor of Tehmash Academy 2 as the players of that side were too fierce in their game play to which Predator FC was threatened and kept falling in their performance from start till the end.
Once the winner side had made a mistake of letting past the opponent's goal through their net post, they did not allow any further attempts to even come close to their side, instead they improved their already aggressive game strategy with hitting the ball in the opposite goal post one after the other.
Peshawar Model Schools and The Model Cricket Academy jointly organized Model Soccer League 2019 where a total of 16 teams competed for top honors which are namely stated below:
Participating teams are: PMS Boys IV, Friends FC, Government High School Bashirabad, Government High School Shabqadar, PMS Hayatabad Boys, Khushal Dragons, Akyab FC, PMS Boys I, Hayatabad Sports Complex Jr, PMS Sawabi, Tehmas Academy 1, Tehmas Academy 2, Young Boys FC, Star FC and Charsadda Football Academy.