Pakistan's Babar Azam thumped a splendid to marked the historic return of One-day International Cricket to Karachi as the hosts completed a resounding 67-run victory over Sri Lanka in game two of the rain-marred Pakistan-Sri Lanka Cricket Series (2019) at National Stadium. 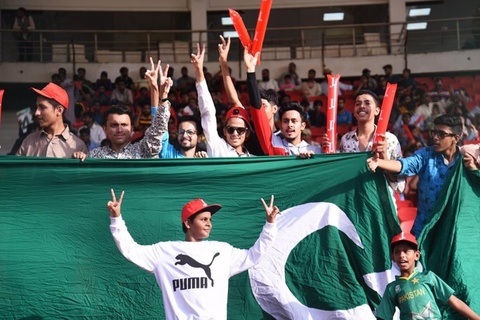 Pakistan-Sri Lanka Cricket Series (2019)      Gaddafi Stadium
After Friday’s opening fixture of the Inverex presents Brighto Cup three-match ODI series was washed out without a ball being bowled, Sri Lanka’s new-look side saw Pakistan ride on Babar’s supremely confident 115, which was his 11th hundred from just 73 one-dayers — the third quickest to that number of centuries after the South African duo of Quinton de Kock (65 matches) and the recently-retired Hashim Amla (66) — to reach 305-6.
Sri Lanka’s response, particularly at the start of the innings, was as feeble as it could be given the depleted makeup of their team following the withdrawals of 10 senior players from the tour. When it seemed the match would be over even before the midpoint of the chase when the top five wickets went down in the space of 10 runs in 38 deliveries with inspired Usman Khan Shinwari taking a five-for as Sri Lanka were eventually all out for 238.
At 28-5 at the start of the 11th over spelled the doomed for them. But then Shehan Jayasuriya and Dasun Shanaka — who will be the tourists in the three Twenty20 Internationals that follow in Lahore — together stitched an all-time highest partnership for the sixth wicket in all One-day Internationals against Pakistan.
The pair added 177 in 184 balls to surpass the longstanding landmark of 154 by West Indies’ Richie Richardson and Jeffrey Dujon at Sharjah in October 1991, while comfortably Sri Lanka’s previous best against Pakistan when Marvan Atapattu and Upul Chandana, also at Sharjah in April 2002.
The mayhem upfront was created by Usman, the left-arm quickie who grabbed three wickets upfront before returning in the death overs to take a brace while finishing with deserving haul of 5-51, while overshadowing Mohammad Amir and Wahab Riaz on the night.
The left-handed Jayasuriya narrowly missed scoring his maiden century in this format when he was caught behind by Sarfraz off Usman for 96 with the 28-year-old’s 108-ball knock including eight fours and one six. Without addition to the team total, Shanaka also departed for an 80-ball 68 (six fours and two sixes) before the wheels completely off the Sri Lanka innings in the 47th over, leaving Pakistan to head into Wednesday’s third and final fixture in a state of comfort.
But the day belonged to man-of-the-match Babar as the 24-year-old from Lahore batted the best part of 32.1 overs after Fakhar Zaman and Imam-ul-Haq cashed in on lack of real penetration in the Sri Lankan bowling to put on 73 inside the opening 15 overs.
In what was the first ODI in the city of lights after 3904 days — the last such encounter also involving these nations, who have enjoyed extremely close relationship, on Jan 21, 2009 — the whole atmosphere centre around security-related issues from the days leading into this limited-overs series, which is also a litmus test for Pakistan cricket as well after years of being deprived from hosting full-fledged international teams.
The sight of Sarfraz Ahmed and Lahiru Thirimanne, leading his country for the first time in an international fixture, going for the toss was the first signs of real action on a steamy afternoon. But Thirimanne called incorrectly to contemplate a hard period in the field under the sun while the crowd — which reached its peak only after the lights came on but still remained much less than the actual capacity of just over 34,000.
The departure of Imam, pushing rather halfheartedly against leg-spinner Wanindu Hasaranga who got his trapped the left-hander for a 41-ball 31 via a Decision Review System (DRS) verdict after England umpire Michael Gough had turned down the original leg-before appeal.
Fakhar, who has come into the series under cloud of uncertainty caused by a dodgy knee and the overall form with the bat, provided glimpses of trademark strokes on way to scoring 54 — only the third score of 50-plus in his last 12 One-day Internationals — before throwing away his wicket carelessly after having hit six fours and one six.
But the redoubtable Babar, rated among the world’s top crop of current batting stars, was not going to miss the opportunity to be part of cricketing history by reaching his third century against Sri Lanka but the first on the home soil. However, he had a narrow escape when Sadeera Samarawickrama, the stopgap wicket-keeper in the absence of Niroshan Dickwella and Kusal Perera, couldn’t grasp a possible chance when he got the glove to a leg glance off Nuwan Pradeep.
Haris Sohail partnered Babar to put on 111 in 112 deliveries before misunderstanding between them resulted in Haris being run out for a 48-ball 40, that included just a solitary boundary.
Sarfraz, who had announced that he would be promoting himself up the order, also went in the same way as he did Haris after eight. Babar finally left the arena after hitting eight fours and four sixes during his 105-ball.
The last moments of Pakistan’s innings belonged to the recalled Iftikhar Ahmed, who signaled his intentions quite well by providing the perfect impetus as he slammed 32 from 20 balls in his first ODI after almost four years away from the format. 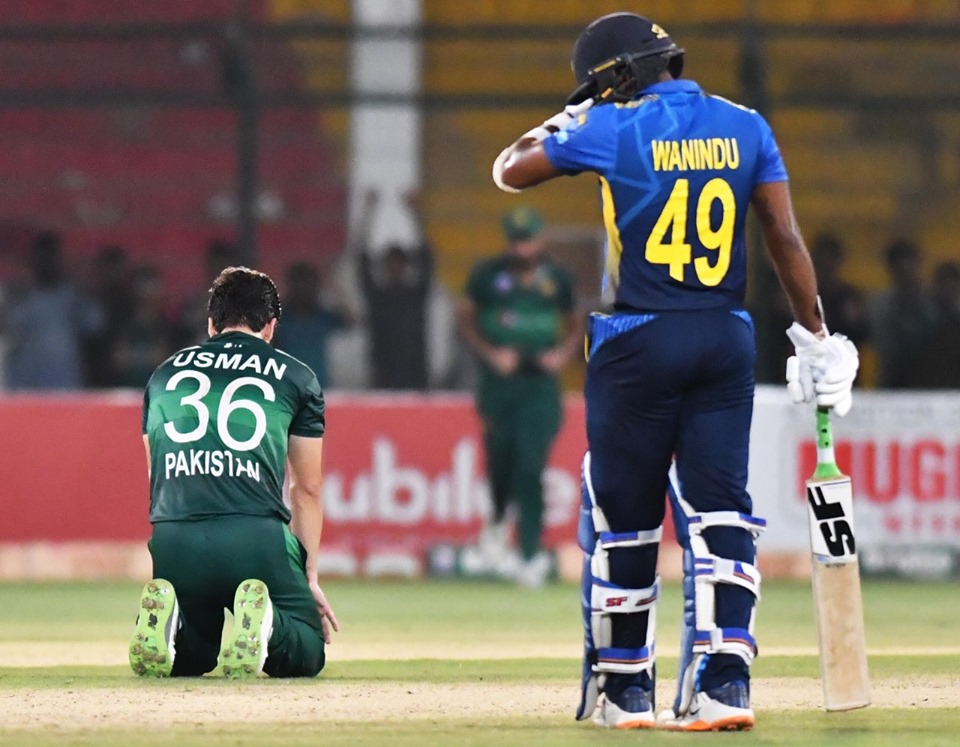 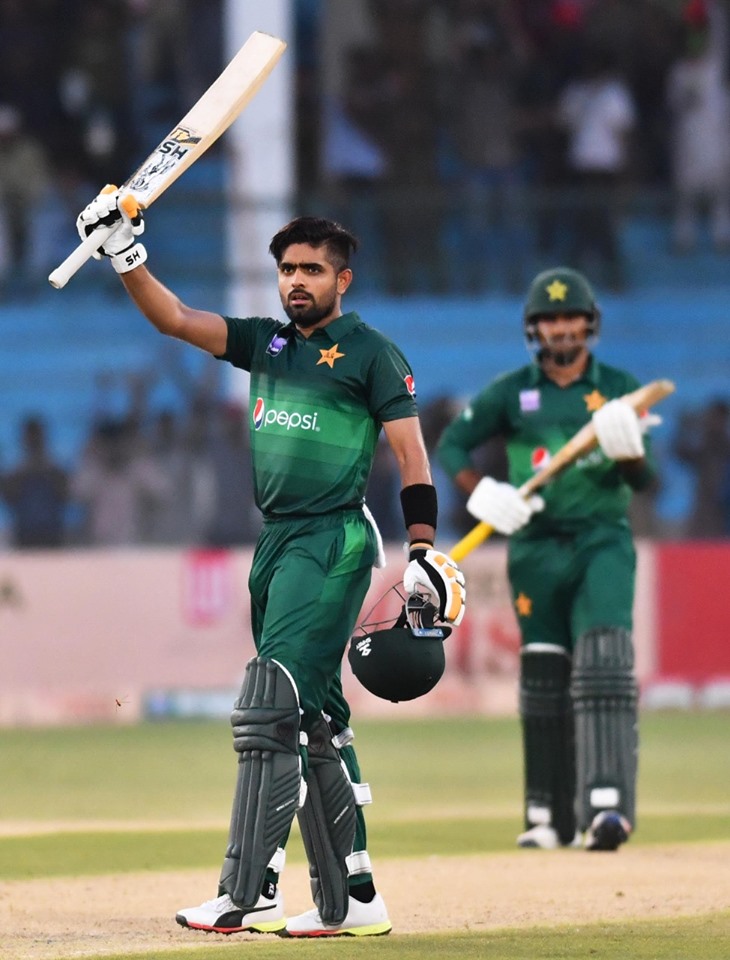 The third match into the Pakistan-Sri Lanka Cricket Series (2019) would be played tomorrow at the same venue at sharp 03:00 PM.