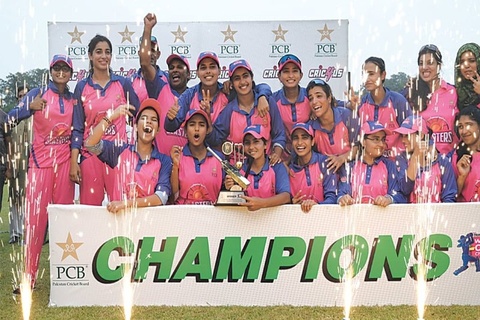 National Triangular One-Day Women's Cricket Tournament      Lahore Gymkhana
The two teams that made it to the final of National Triangular One-Day Women's Cricket Tournament 2019 stood  PCB Blasters and PCB Challengers where it was the unbeaten century from Sidra Amin, which included a 100-run partnership for the fourth-wicket with Aliya Riaz that guided PCB Blasters to a six wicket win against their opponents.
After being put into bat, PCB Blasters scored 216 for five in 50 overs. Right-handed opener Sidra hit 11 fours in her unbeaten 153-ball 102.
Aliya scored 42 off 47 balls with one four and three sixes. PCB Challengers were restricted to 210 for seven in 50 overs as Tooba Hassan and Almas Akram took two wickets each.
Javeria Rauf top-scored in the innings with 51 off 83 balls with seven fours. Bismah Maroof scored 56-ball 44, which was laced with five fours. They scored 82 runs for the second wicket.
Requiring 14 runs in the final over to win the match, the Challengers managed only seven off Aliya’s bowling.
Sidra was declared the player of the match while PCB Challengers' leg-spinner, Syeda Arooba Shah won the player of the tournament award for bagging 14 wickets.
Summarized scores:
* PCB BLASTERS: 216-5 in 50 overs (Sidra Amin 102 not out, Aliya Riaz 42);
* PCB CHALLENGERS: 210-7 in 50 overs (Jaweria Rauf 51, Bismah Maroof 44, Natalia Pervaiz 39 not out; Tooba Hassan 2-28, Almas Akram 2-38).
Lahore hosted the National Triangular One-Day Women's Cricket Tournament 2019 which was organized by Pakistan Cricket Board (PCB) and featured as many as 42 players where the women cricketers were provided with a chance to showcase their talent in a jam-packed cricket season.
The winner team was awarded with a cash prize of PKR 500,000 and the Runner-up team collected a cheque of PKR 250,000. In addition to this, for the first time, each player was paid PKR 10,000 as match fee, while Kookaburra cricket ball was used for the event that was played on a double-league basis.