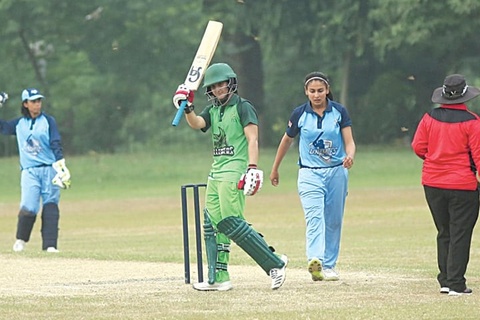 National Triangular One-Day Women's Cricket Tournament      Lahore Gymkhana
Captain Bismah Maroof’s unbeaten 72-ball 55 and Syeda Aroob Shah’s six for 41 secured a berth in the final for PCB Challengers as they defeated PCB Dynamites by six wickets in the final league match of National Triangular One-Day Women Cricket Championship 2019.
PCB Challengers' third victory came out in this game as they chased down the target of 132 runs in the 29th over for the loss of four wickets.
After losing three batters inside 10 overs, Bismah, who hit 11 fours, weathered the storm with a 46-run fourth-wicket stand with Sidra Nawaz (17 off 30) and an unbeaten 49-run partnership for the fifth wicket with Iram Javed (31 not out from 36 balls).
For PCB Dynamites, Kainat Imtiaz was the pick of the bowlers with two for 18.
Earlier in the day, PCB Dynamites, after been put into bat, were dismissed for 131 in 41.5 overs. Muneeba Ali was the top scorer in the innings with 25 off 44 balls. Kainat was another notable run-getter with 45-ball 22.
Syeda Aroob Shah took six for 41 in 8.5 overs. Her figures went down as the best in the match.
Summarized scores:
* PCB DYNAMITES 131 in 41.5 overs (Muneeba Ali 25, Kainat Imtiaz 22, Nahida Khan 21; Syeda Aroob Shah 6-41);
*PCB CHALLENGERS 132-4 in 28.5 overs (Bismah Maroof 55 not out, Iram Javed 31 not out; Kainat Imtiaz 2-18).
PCB Challengers will now play against PCB Blasters in the grand finale tomorrow at the same venue.