PCB Dynamites finally celebrated their first success in the 2019 National Triangular One-day Women’s Cricket Championship which is being held at Lahore Gymkhana Ground. 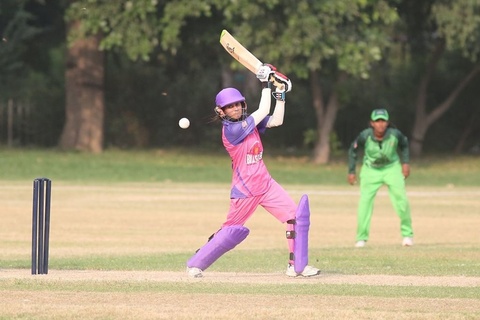 National Triangular One-Day Women's Cricket Tournament      Lahore Gymkhana
Muneeba Ali followed up Maham Tariq’s fine bowling with a match-winning innings as PCB Dynamites finally tasted their first victory in National Triangular One-day Women’s Cricket Championship 2019.
The Dynamites’ eight-wicket victory over PCB Blasters in this fifth game of the tournament was sealed by Muneeba who scored an undefeated 57 off 95 balls with the aid of four boundaries to help her side post 176-2 in the 44th over.
Muneeba and Nahida Khan (38) set the foundation victory with a fine opening stand of 69, while Javeria Khan also contributed with a 71-ball 44, and added 79 for the second wicket with player-of-the-match Muneeba.
Earlier, Maham picked up four wickets for 35 runs in 10 overs as the Blasters were all out for 175. Aliya Riaz was the top-scorer with 50 off 72 balls (seven fours) and Sidra Amin also chipped in with a 67-ball 47(six fours).
The last league match will be played today between the Dynamites and the Challengers teams.
Brief scores:
* PCB BLASTERS 175 in 49.3 overs (Aliya Riaz 50, Sidra Amin 47; Maham Tariq 4-35);
* PCB DYNAMITES 176-2 in 43.3 overs (Muneeba Ali 57 not out, Javeria Khan 44, Nahida Khan 38; Ramin Shamin 2-34).