Several Pakistan Cricketers, including the Captain, Sarfaraz Ahmed, have attended Level One Coaching Course by Pakistan Cricket Board ahead of Pakistan-Sri Lanka Series (2019) in Lahore. 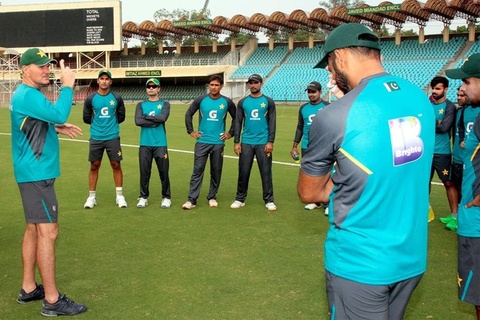 Pakistan Cricket Board (PCB) organized Level One Coaching Course on the sidelines of Pakistan Cricket Team’s training camp in Lahore for the preparation of Series against Sri Lanka.

An official of PCB confirmed that 11 players, including Sarfaraz Ahmed did the basic level one coaching course during the camp that was conducted by Ali Zia at National Cricket Academy (NCA).

“The players were in available during the camp and PCB organized the course for them to have them an idea of coaching."


Following the course, players are now expected to submit their assignments in two-week time before completing their certification.


Skipper, Sarfaraz Ahmed has termed the coaching course as a great learning experience and said that it will help players learn different methods of learning and teaching.

Sri Lankan cricket team will arrive in Karachi on 25th September, where it will play three ODIs on September 27, 29 and October 02 against Pakistan for which Pakistan Cricket Head Coach and Chief Selector, Misbah Ul Haq has named a 16 member squad. While Lahore will host three T20Is on October 05, 07 and 09 after which the visitors will fly back to home on 10th October.