Pakistan recorded a convincing 163-run victory against minnows, Kuwait at Tyronne Fernando Stadium, Moratuwa, but failed to reach the semi-finals of the 2019 ACC U-19 Asia Cup because of two straight losses in earlier games. 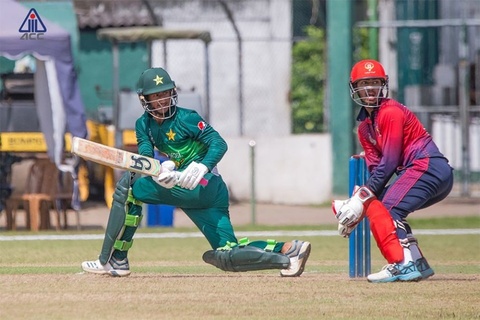 Asian Cricket Council (ACC) U-19 Asia Cricket Cup 2019      Colombo, Sri Lanka
Pakistan was up against Kuwait in their third fixture where the green shirts by 163-run, convincingly won the match with Mohammad Wasim and Qasim Akram proving to be the key players for this victory.
An all-round effort by Mohammad Wasim who hit a 20-ball unbeaten 55 (two fours and six sixes) to propel Pakistan to their 335 for nine total in 50 overs and followed it with a three wicket spell to help his side to their comfortable victory. While Qasim made 28 runs and then took four wickets in his match winning contribution.
Captain, Rohail Nazir won the toss and opted to bat first, the foundation of the Pakistan total was laid by Irfan Khan (63 off 68 balls) and Haris Khan (53 off 41 balls). Fahad Munir made 42 before Wasim’s whirlwind innings provided the icing on the cake. Rohail scored 34 runs off 45 balls. and Jandu Hamoud took four wickets for 60 runs.
Kuwait batsmen found the target beyond their reach as Pakistan bowlers led by Qasim (four for 38) and Wasim (three for 23) kept a tight leash on the scoring rate. Abu Huraira provided two vital breakthroughs in his economical 10-over spell in which he conceded 33 runs.
Kuwait captain, Abdul Sadiq scored 60 runs while Govind Kumar made 45, the two added 110 runs for the third wicket but their departure titled the match in Pakistan’s favor.
Summarized scores:
* PAKISTAN U-19: 335- 9 in 50 overs (Irfan Khan 63, Mohammad Wasim 55 not out, Haris Khan 53; Jandu Hamoud 4-60) ;
* KUWAIT U-19: 172 all out in 43.4 overs (Abdul Sadiq 60, Govind Kumar 45; Qasim Akram 4-38, Mohammad Wasim 3-23, Abu Huraira 2-33).
However, Pakistan's this win did not help them at all to hold a place in the semi finals of the tournament as the green shirts have lost their two previous matches against Afghanistan and India.