As many as 45 bouts took place in the 2019 Jashan E Azadi Inter-Club Wrestling Championship which successfully concluded at PSB Coaching Center in Lahore. 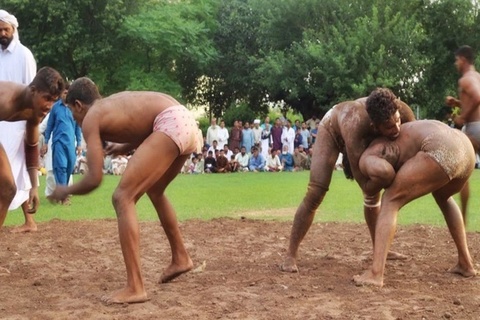 Under the vision of PTI Government and Minister of IPC Mrs Dr Fehmida Mirza, Pakistan Sports Board (PSB) in collaboration with Pakistan Wrestling Federation held a Dangal which was offically named as "Jashan E Azadi Inter-Club Wrestling Championship".
This event was organized in connection with 72nd Independence Day of Pakistan and was conducted at the PSB Coaching Center in Lahore where mud wrestling competitions commenced from 09:00 AM sharp, featuring several talented wrestlers who proved their mettle in total 45 bouts that were contested in this event.
Malo Palwan of Lahore was the sole winner of Title Fight of this championship where, with his unbelievable strength was enough to scare his opponent to close his cool when he got in the ring of mud to ensure his named etched on the Title Fight.
While other winners stood Nadir, Hassan Ali, Husnain Ali and Dawood Khan who excelled over their counterparts and came out the strongest to stand the victory gainers of their respective bouts.
A huge crowed witnessed these competitions being held along with the honorable chief guests, Raja Ghazanfar Javed Binder, DDG (Finance) Pakistan Sports Board and Mr. Muhammad Arshad Sattar, who were of the view that this event stood as a great opportunity for the promotion of wrestling in the country at grass root level.