Secretary General Softball Federation of Pakistan (SFP), Asif Azeem have announced that Karachi will host three-day Softball Asia Pakistan Coaching Clinic which is scheduled to be held from 22 to 24 August. 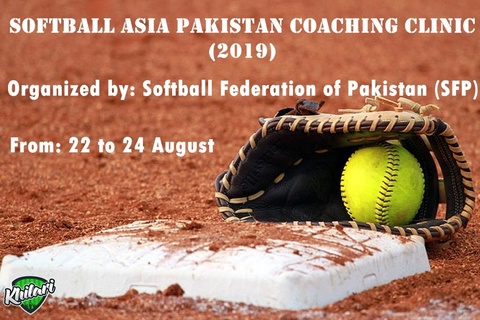 The 2019  Softball Asia Pakistan Coaching Clinic is all set to commence from 22nd August for three days on-wards as it was announced by the Secretary General, Softball Federation of Pakistan (SFP), Asif Azeem that Karachi will hosting this coaching camp.

He also informed that instructors from Malaysia and Canada will train the coaches who are associated with the federation, provincial associations and departments. They will be holding multimedia lectures on rules, regulation and other relevant knowledge about the game. along with field activities, which include field position, batter position, pitching, catching and also a demonstration about physical fitness.

“It is the first time that WBSC is sending its instructors for a Coaching Clinic to Pakistan. Instructors Hanfia and Hajra from Canada and Malaysia are coming to Pakistan to lead the camp.” disclosed Asif.

He added that the coaches who will perform well during the coaching clinic, will be send abroad for training. SFP President, Haider Khan Lehri has appointed Sindh Softball Association (SSA) Secretary, Zeeshan Merchant as Coordinator Coaching Clinic.
World Baseball Softball Confederation (WBSC) Secre­tary Beng Choo Low will come to Karachi attend the event’s closing ceremony as chief guest while Pakistan Olympic Association (POA) President Arif Hasan will address the closing ceremony.
Meanwhile, he also thanked WBSC's Beng Choo Low for taking keen interest for the promotion of Softball in Pakistan. He ensured that SFP would do its best to host the event in a befitting manner.