Babar Azam of Pakistan scored a superb unbeaten 55-ball century as Somerset thrashed Hampshire in the 2019 Global T20 League Canada which is being held in Brampton, Ontario, Canada. 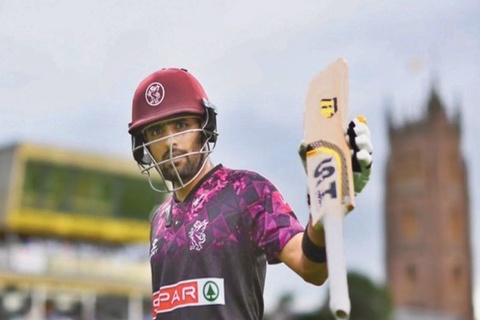 Global T20 League Canada Season II      Brampton, Ontario, Canada.
Pakistan’s ace batsman, Babar Azam scored a superb unbeaten 55-ball century as Somerset thrashed Hampshire in the T20 Blast Tournament as he struck six sixes to help the hosts post 202-4.
Hampshire were 69-6 when rain brought about an early conclusion. Right-handed Babar, world’s top-ranked T20 batsman, has taken this year’s T20 Blast by storm as the 24 year old made an unbeaten 95 at Taunton earlier in the competition.
He was not to be denied three figures this time, however, smashing the final ball of Somerset’s innings for six to take him to 102, reaching his best score in T20 cricket in the process.
It means the Pakistan batsman has now scored 197 runs in two T20 matches against Hampshire this year, remaining not out and batting for all 40 overs. Babar even took two catches as Hampshire slipped to 69-6 in reply, with the arrival of rain meaning Somerset won by 63 runs on Duckworth-Lewis-Stern.
A total of six teams are featuring to earn top honors in the Global T20 League Canada Season II among which, total six Pakistani cricketers are seen in action in different teams. Former Pakistan all-rounder, Shahid Afridi is representing Brampton Wolves along with left-arm pacer, Wahab Riaz.
Spin duo of Shadab Khan and Mohammad Nawaz is a part of the Edmonton Royals squad. Meanwhile, veteran all-rounder Shoaib Malik is turn up for Vancouver Knights who have retained Chris Gayle and Andre Russell in their squad.
Hard-hitting batsman, Umar Akmal is also being a part of this league, playing for Winnipeg Hawks. Toronto Nationals and Montreal Tigers are the other two franchises in the tournament.