Qari Adnan played well and gave a stunning performance in the Championship as he won the boys under-18 title of All Pakistan National Junior Ranking Badminton Championship concluded successfully at the Abbottabad Sports Complex, Peshawar. 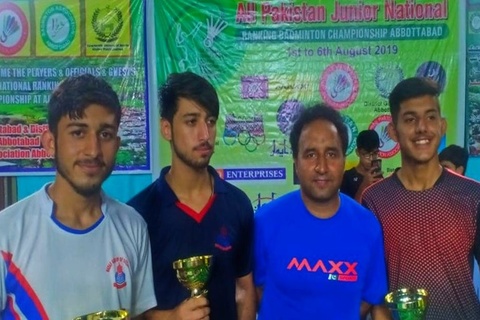 All Pakistan Junior National Ranking Badminton Championship 2019      Abbottabad
All Pakistan National Junior Ranking Badminton Championship concluded successfully at the Abbottabad Sports Complex, Peshawar where promising Qari Adnan played well and gave a stunning performance in the championship as he secured the boys under-18 singles & doubles titles.
Super-fit Qari Adnan of Khyber Pukhtunkhwa overpowered Raja Zulqarnain of NBP by 2-1. Raja put a shiny start as he won the first game by 21-15. Adnan came back brilliantly as he won the next two consecutive game by 21-19 21-15 and won the boys under-18 title.

Brigedair Zaheer Akhtar DG Pakistan Army Sports Board graced the closing ceremony as a chief guest and distributed prizes among the winners.
Earlier, in the thrilling Boys Under-16 singles Umar of Khyber Pakhtunkhwa faced tough resistance against Raja Hassan of Punjab in thrill-packed three sets final, the score was 17-21, 21-18 and 21-09. Umar failed to win the first set and lost it at 17-21 before leveling the tally at 5-5, 6-6, 9-9, 10-10, 11-11, 12-12, 13-13, 14-14, 15-15, 16-16 and 17-all. It was the second set in which despite losing the first set, Umar staged a strong come back and marched into the victory at 21-18 and did the same at 21-09.
In the Under-14 singles final Ibrahim of Punjab defeated Amer Hassan of Army by 21-19 and 21-16. Both Ibrahim and Amer played well and gave each other a tough fight but overall Ibrahim dominated the match and did not give much room to Amer Hassan of Army to strike back.
In the Girls U-18 Single Amal Muneeb upset top seeded and Pakistan No. Alja Tariq of Army in a marathon two sets battle wherein both stretched to 22-20 in the first set and did the same in the second set when Amal Muneeb got the set by 21-19.
There were a point to point struggle between both Amal Muneb of Punjab and Alja Tariq of Army but Amal Muneeb played well and used her cool head against Alja Tariq who made forceful errors, specially in the first set. The first set was tied at 5-5, 7-7, 9-9, 10-10, 13-13, 17-17, 19-19, 20-20, and thus Amal got the set by 22-20. It was the second set in which Amal raced up to 9-3, and 13-7 but after 13-13, the set was also tied by Alja Tariq of Army at 14-14, 17-17, 19-19.
In the Girls U-18 doubles Amal Muneeb and Noor Amila (Punjabi) beat Alja Tariq and Samia Tariq (Army) by 21-15, 21-14 in a one-sided affair. Both Amal Muneeb and Noor Amila of Punjab dominated against Army pair Alja Tariq and Samia Tariq.
In the Boys U-18 doubles super-fit Qari Adnan and Zubair Shah of KP, who upset both Punjab and Pakistan Army pair, did not face any hardship against Shahan and Taimoor, also from Khyber Pakhtunkhwa in all Khyber Pakhtunkhwa affairs final, the score was 21-18 and 21-16.