North Zone Reds qualified for the final of the 2019 LRCA Inter-Zonal U-16 Cricket Tournament by defeating West Zone Blues on 21 runs at the LCCA cricket ground in Lahore. 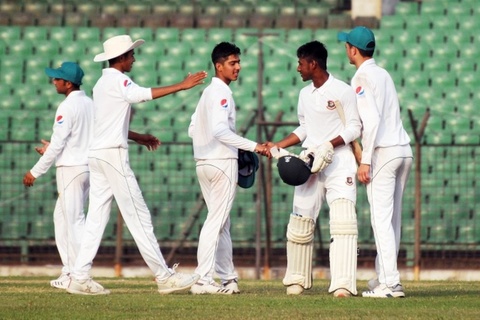 North Zone Reds and West Zone Blues teams were battling for the final berth in the most recent encounter played into LRCA Inter-Zonal Under-16 One-Day Cricket Tournament (2019) in which it was the hard efforts of North Zone Reds boys who managed to book their place in the finale of this mega cricket tournament by beating the opponent team on 21 runs.

Both team players played their heart out in this do-or-die semi-final as it was not an embarrassing blowout for the losing team as they lost only by a difference of 21 runs. It was much of a rain-hit clash which made it difficult for the teams to play with their full potential but despite the strenuous conditions, the teams performed well enough.

Rana Arsalan starred with 102 and Mohammad Naeem made 88 as North Zone Reds amassed 291-8 in the stipulated 40 overs. While West Zone Blues had reached 96-3 in 16.3 overs when rains put an end to the match, leaving North Zone Reds winners on net run-rate.
Summarized scores:
*NORTH ZONE REDS 291-8 in 40 overs (Rana Arsalan 102, Mohammad Naeem 88; Huzaifa Javed 3-15, Kashif Ali 2-39);
*WEST ZONE BLUES 96-3 in 16.3 overs (Hamza Nawaz 51).
The Lahore Region Cricket Association (LRCA) have organized the 2019 Inter-Zonal One-day Cricket Tournament which started at various venues in Lahore from July 1st. This tournament is featuring players under sixteen (16) years of age.
A total of four (4) teams belonging to each from all three (3) zones of Lahore Region Cricket Association (LRCA) are taking part in this mega cricket tournament. The participating teams are divided into two (2) pools.
Players from all three (3) zones are seen performing with all their skills in their clashes against one and another so as to earn the ultimate title as well as top honors in the tournament.