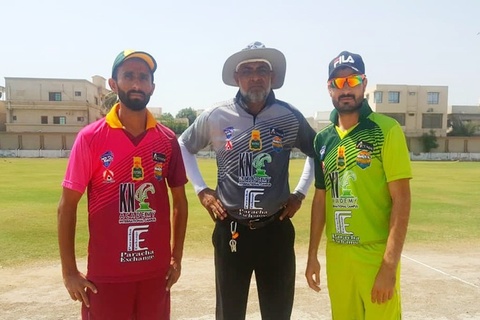 1st Paracha Exchange Royal Ramzan T20 Cricket Cup      Al Mansoora Cricket Ground
The ninth match of the tournament witness Al Habib Rangoonwala Cricket Club players giving their all against Rehman Foundation boys so as to earn the victory of the game, but it was the strong side of  Al Habib Rangoonwala Cricket Club that outplayed their opponents by ten wickets to claim the win of the match.
It was said to be a one sided contest as Rangoonwala team put up a dazzling show to decimate Al-Rehman Foundation after restricting Rehman Foundation to a modest 117-8.
Rangoonwala boys blazed their way to victory in only 7.4 overs on the back of belligerent knocks from Bahadur Ali (60 off 25 balls, five sixes and six fours) and Bismillah Khan (55 off 23, five sixes and four fours) by reaching 120 without loss.
At the end of the game, Activade Man of the Match was declared Bahadur Ali while Adventuresy Special Performance awarded went to Bismillah Khan. Adventuresy Best Bowler title was given to Muhammad Ilyas. 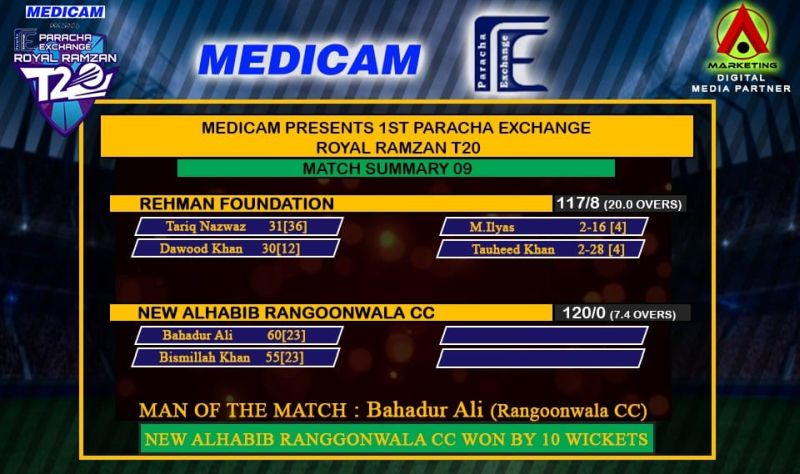 Today's fixture will have Heroes Cricket Club and New Al Habib Rangoonwala Cricket Club locking horns in the tenth match which is scheduled to be held at 02:00 PM sharp at the same venue.

Royal Cricket Club in joint efforts with Medicam has organized the first ever, Royal Ramzan T20 Cricket Cup, into the current year, for the very first time. This tournament is featuring about a total of ten (10) teams belonging to several noticeable cricket clubs from all over the Karachi city.