Army team claimed the title of 18th National Netball Championship in both men and women categories thus emerging as the new champions at Pakistan Sports Complex in Islamabad. 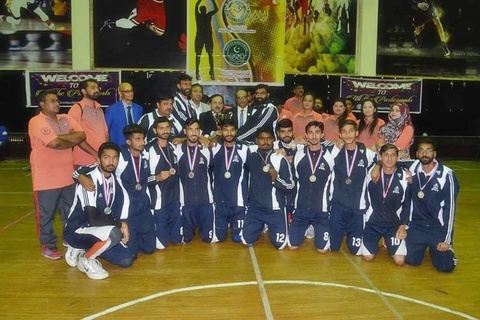 18th National Men and Women Netball Championship      Pakistan Sports Complex, Islamabad.
The 18th edition of National Men and Women Netball Championship concluded successfully with Army winning both the titles of men and women category and emerged the new champion as WAPDA and Sindh could not retain their titles of their previous edition's wins.
This championship was organized by Pakistan Netball Federation (PNF) in collaboration with Pakistan Sports Board (PSB) that featured a total of about 16 teams, players from which were seen battling against each other with all their might so as to earn the ultimate title of the championship.
Participating teams included: Pakistan Army, Pakistan WAPDA, Pakistan Air Force (PAF), Pakistan Navy, Pakistan Railways, Pakistan Police, Higher Education Commission (HEC), Azad Jammu and Kashmir (AJK), Balochistan, Punjab, Sindh, Khyber Pakhtunkhwa, FATA, Islamabad and Gilgit-Baltistan.
In the Men's final, Pakistan Army was up against Pakistan WAPDA in which Army team players showing their splendid performance finished the match in their favor by the final score line of 32-28 while in the Women's event, Pakistan Army girls finished the match as a one-sided encounter against Sindh team by 30-20.
As both, WAPDA and Sindh teams were not able to retain their titles, they did manage to claim second and third positions in the championship. While the 3rd position match in Men's event was won by Pakistan Navy after the team defeated Sindh by 35-22 goals and Pakistan WAPDA was declared the 3rd position winner beating HEC by 29-18 goals in the Women's category.
Akbar Hussain Durrani, Federal Secretary Ministry of Inter Provincial Co-ordination was the chief guest along with Chairman, Pakistan Netball Federation (PNF), Capt (R) Zafar Iqbal Awan, President, Mudassar Arian, Secretary General, Muhammad Riaz, witnessed the final winner of the championship and at the concluding ceremony, awarded the winners with trophies, medals and certificates.