Human FC and Rover FC recorded wins in the last weekend matches played into Islamabad Super Football League 2019 which is being held at Akbar Football ground in Islamabad. 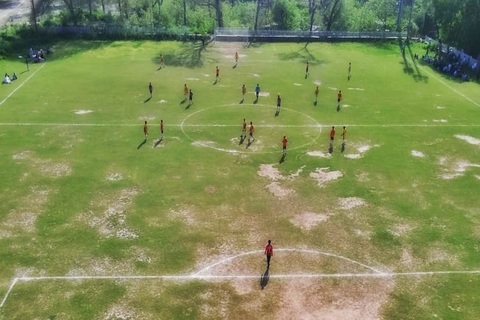 Islamabad Super Football League 2019      Akbar Football Ground
The match started on fast tempo and it was Huma FC's Obaid who slammed in a beautiful goal to make the scoring tally 1-0 to which the star of the match, Imran slotted another fine goal to further enhance the score line to 2-0.
After taking a 2-0 lead, Human FC team put in more pressure to score more for their side and not let the opponent team; CDA FC, catch up on the score line and the team became successful when Imran yet again, let the ball found the back of the enemy net. Maaz and Ali then slotted past several approaching opponent team's players and scored 1 goal each to make it a 5-0 victory. CDA FC had to suffer an humiliating loss as the players were not able to score a single goal throughout the game and comparatively, the winning team had score 5 goals.
The second clash saw Mehran FC and Akbar FC playing against each other in which both teams scored 1-1 goal for their respective side and as the final whistle blew, the match finished in a 1-1 draw. Akbar FC scored first in the game through Asad at the 36th minute but Daniyal Khan from Mehran FC soon netted the ball in the enemy net at the 44th minute, equalizing the score line. Mehran FC's three players were given a yellow card warning for their foul play in the match while Akbar FC received one due to Salman's wrong play.
Rover FC and Ravi FC were battling for the win in the third encounter in which Rover FC won the game by 3-2 as the team kept up more pressure to take the lead and got successful through Mobeen first and then Naik Alam extended their lead on slamming 2 goals straight into the enemy's goal post. To which Ravi FC scored 2 goals. It was a thrilling match as the winning team won only by a goal's difference.
Pakistan Football Federation (PFF) and Islamabad Football Association (IFA) has organized this mega football league that has been named as "Islamabad Super Football League" into its very first edition. This mega football action is featuring a total of eight (8) top football club’s teams from the capital and the boys from their respective clubs and teams are seen making efforts to win against each other for the ultimate title gain of the league.
Participating teams includes: Rover Football Club, Mehran Football Club, Huma Football Club, CDA Football Club, Ravi Football Club, Evergreen Football Club, Akbar Football Club and Islamabad Academy. This league is having matches played only on weekends.