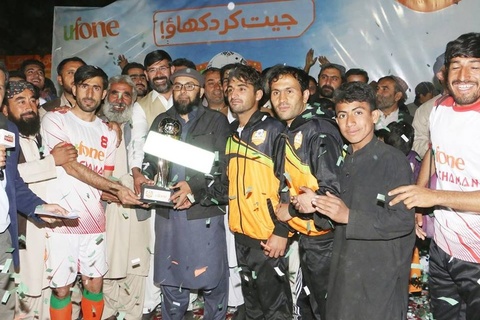 3rd Ufone Balochistan Football Cup      Different Football Stadiums
Afgan FC Chaman and Jallawan FC Khuzdar were battling for the final win of the 3rd Ufone Balochistan Football Cup in which Afgan FC Chaman stunning claimed the victory and made the opponent team fall against the great efforts from their players.
Afgan FC Chaman boys were on the run from the moment match started as they took advantage of the low goal keeping and less speed of Jallawan FC Khuzdar team and slotted the ball in the enemy net twice to their failing goal keeping. It was not possible for the losing team to get out of the pressure imposed on them by the winning team as the winning team's boys kept coming with goal one after the other and finished the match in their favor convincingly by 2-0.
It was Naimat Ullah who opened the scoring tally for the winning team just at the 19th minute into the game to which Jallawan FC boys tried to equalize the score line and made efforts and just when they were seemed to strike a goal at the 28th minute, the winning team's goal-keeper Hameed Ullah made a thrilling save and did not allow anymore goals from the enemy side to pass through. While the other one who added prestige to the winning lead of Afghan FC was Abdur Rahim struck in an attacking move during the 51st minute and from then on, Jallawan FC boys had no chance to score left at all.
During the half-time Quetta based singer and musician Izhaar Ali performed the championship’s official anthem ‘Jeet Ke Dikha Do’ and received huge applause from the crowd.
Muhammad Asghar Kasi, President of Balochistan Football Association Quetta, was the honorable chief guest who witnessed the final game being played along with Ufone’s Regional General Manager (South), Syed Faisal Rizvi and they together awarded the trophy to the winning team's Captain, Jadeed Khan. Several Medals were also distributed among all top four teams along with cash prizes.
“We have enjoyed playing this season and all the teammates worked very hard,” said Jadeed. "We are very happy with our performance and look forward to the next season."
Kasi said that he was very happy to see the level of talent the youth displayed during the tournament. "The level of arrangements, especially the games being played under lights and live broadcast, speaks volumes about Ufone’s commitment to developing football in the province, and I would like to congratulate them for a highly successful tournament this year,” he added.