For the first time, the semi-finals will be played under floodlights today between Quetta, Pishin, Khuzdar and Chaman teams at Mali Bagh Stadium in Quetta. 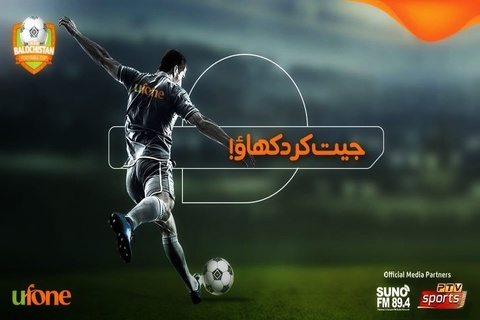 The top-4 teams that made it to the semi-final stage of 3rd Ufone Balochistan Football Cup are Faiz Ullah Agha FC Quetta, Afghan FC Pishin, Jallawan FC Khuzdar and Afghan FC Chaman, whose players have worked hard enough to make their teams successfully qualify for the semi-finals of this mega football action.

In the first match played yesterday between Afghan FC Chaman and Panjgur FC, Afghan FC Chaman easilywon over the opponent team by a score line of 3-0. Aman Ullah, Abdul Rahim and  Sohrab were the scorers for the winning team. Panjgur Football Club fell to the strong goal-keeping and tremendous speed of the winning team's players thus the losing side's footballers were not able book their team any further place in the tournament.

Afghan FC Pishin also had difficulty in claiming a position in the semi-finals of the tournament against Bacha Khan FC Loralai as both teams ended the match in a goalless draw, plenty shootout thus determined the outcome of the match. It was 7-6 in penalty shootout and the win went to Afghan FC Pishin.
Another clash saw Tiger Raesani FC Quetta's fall over Jallawan FC Khuzdar by 5-4. Both teams were not able to goal past each other's net post and when the final whistle blew, it was goalless draw thus the teams were given plenty shoot outs in which Jallawan FC Khuzdar dominated and made their way into the semi-final stage of the tournament.
The semi-final games will be played today under the floodlights, for the first time ever. The final is scheduled for tomorrow.
About a total of 48 teams took part in the third edition of Ufone Balochistan Football Cup which was being held in eight (8) different cities within the country listed for the conduction of the tournament. This event has now reached the Super Eight stage and now the matches will be conducted between the qualified teams from 28th March in Quetta.
The championship was launched in 2017 and the second edition was held in 2018, both times with the aim of developing football in Baluchistan. And this time, as many as 720 young footballers participated in the tournament’s qualifiers and Ufone or Pak Telecom Mobile Limited are being the title sponsor of the tournament for the third time in row.