Defending champions Islamabad United kept themselves in the hunt for a third HBL Pakistan Super League crown here at the National Stadium when they knocked out local favourites Karachi Kings with a four-wicket triumph. 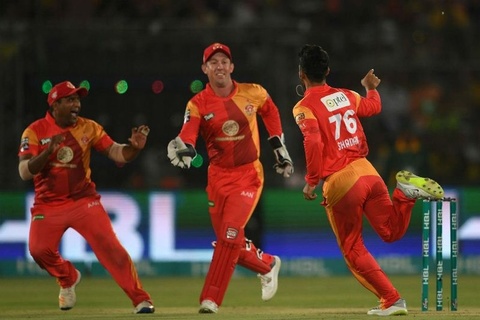 HBL PSL Pakistan Super League 2019      National Cricket Stadium, Karachi
Defending champions Islamabad United kept themselves in the hunt for a third HBL Pakistan Super League crown here at the National Stadium on Thursday night when they knocked out local favourites Karachi Kings with a four-wicket triumph.
Karachi squandered a perfect start to put on a modest 161-9 on the board in the first Eliminator and were also unable to capitalise on their chances during Islamabad’s innings to once again bow out of the PSL in a disappointing manner.
Even an all-out support from a packed crowd at National Stadium was unable to lift Karachi, who had their moments in the match. They were in with a chance especially after 19-year-old left-arm spinner Umer Khan (2-16) got them a couple of key wickets. But Babar Azam dropped dangerman Asif Ali, who made them pay for it with an unbeaten 24 from 10 balls. Faheem Ashraf also chipped in with a valuable cameo of 17 runs from eight balls to help Islamabad win the crucial game with three balls to spare.
England’s Alex Hales with a 41 from 42 balls, Cameron Delport with a 27-ball 38 and Hussain Talat with a whirlwind 32 were the main run-getters for Islamabad. Hales was named man-of-the-match.
“It was tricky and the young Umer Khan bowled really well,” said Hales. “To restrict them to 161 was brilliant and we are now ready for tomorrow,” he added.Even in their own innings, Karachi had themselves to blame for failing to put up an imposing total, a target which was very much in their grasp after scoring 78 runs from the first six overs, PSL’s joint-highest Powerplay score.
Colin Munro played a blinder cracking 32 from just 11 balls. Even after losing him, Karachi were cruising at 102-1 in 10.2 overs with both Babar Azam and Liam Livingstone showing little respect to an otherwise potent Islamabad attack. But both Livingstone and Babar fell in quick succession allowing Islamabad to take control of the proceedings.
Livingstone was the first to go, scalped by spinner Shadab Khan for a 25-ball 30 that included three fours and a six. Babar was unlucky to follow him to the dugout as he tickled one short pitched delivery from Faheem Ashraf down to third man. Faheem’s appeal was turned down but the bowler was confident that he had got his man. The TV review proved him right showing an edge and Islamabad were back in the game. Babar was the top scorer with 42 from 32 balls that included four hits to the fence.
Karachi never really could recover from the twin blow and even though Colin Ingram tried to put the innings back on track his 23 from 16 balls wasn’t enough. Islamabad’s attack put Karachi on the back foot with the young Musa Khan taking the lead with three wickets from 42. Faheem Ashraf was miserly in a tight spell finishing with 2-30. Karachi lost their last eight wickets for 59 in the last 9.4 overs.
Islamabad will now meet Peshawar Zalmi in Friday night’s Eliminator 2 with the winning team setting a date with Quetta Gladiators in Sunday’s grand finale.