Quetta Gladiators and one-time champions Peshawar Zalmi will square-off in the qualifier of Pakistan Super League 2019 at the National Stadium in Karachi today (Wednesday) at 7 pm with both captains promising to fight till the last ball. 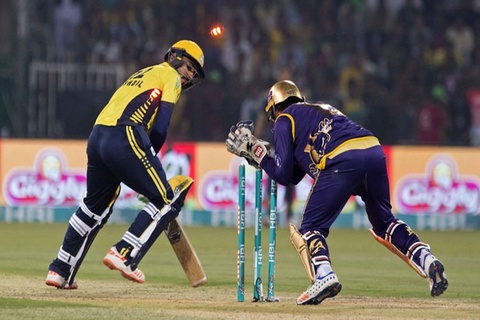 HBL PSL Pakistan Super League 2019      National Cricket Stadium, Karachi
Quetta Gladiators and one-time champions Peshawar Zalmi will square-off in the qualifier of Pakistan Super League 2019 at the National Stadium in Karachi today (Wednesday) at 7 pm with both captains promising to fight till the last ball.
Led by Pakistan captain Sarfaraz Ahmed, Quetta have finished runner-up in 2016 and 2017, while Peshawar outlasted them in the third vs fourth Eliminator in 2018. Interestingly, every time the margin of victory was one-run. This proves no teams is ready to give up until the last-run as the winner will feature in the sell-out March 17 final. The losing side will have another opportunity to qualify for the final when they will meet the winner of Thursday’s Eliminator between Karachi Kings and Islamabad United on Friday.
Sarfaraz promised another cliff-hanger this time as well. “The rivalry is exemplary,” said Sarfaraz. “Every time in the last three years, we had exciting matches which went down to the wire. We will put up another exciting show this time and hope a capacity crowd will have their money’s worth.”
The Quetta-Peshawar rivalry began in 2016 when both the sides shared a match each in the first round, before Gladiators won the war of Qualifier when medium-pacer Aizaz Cheema took two wickets and conceded a single off the last-ball as Peshawar failed to chase down a small target of 134 runs.
Peshawar won one of the league matches in 2017, while the other was rained-off in Sharjah before another Qualifier went to Quetta, this time too Peshawar falling short by one-run in pursuit of a 201-run target. On that day, Hasan Ali was run-out when two runs were needed off the last-ball. But Peshawar had the last laugh, clinching the final and the title with a big 58-run victory against a depleted Quetta, who were without their top foreign players.
They again shared a league match each in 2018, before Peshawar snatched victory from the jaws of defeat by one-run in the Eliminator in Lahore. Needing 25 runs off the last over, Quetta were brought within a stroke of victory by Anwar Ali who hammered three sixes and a boundary off spinner Liam Dawson. But, needing three for victory, Anwar’s partner Mir Hamza was run-out as the batsmen tried to take a second run.
This year Quetta has an edge, winning both their league games by six and eight-wicket margins, respectively leaving the head-to-head in their favour with six wins, five defeats and one no-result in 12 contests. Sarfaraz played down the talk of psychological edge. “I don’t think there will be any psychological edge,” said Sarfraz. “We have all played 10 matches. This will be a new match on a new day.”
He admits Quetta had a more balanced squad, with the induction of former West Indies all-rounder Dwayne Bravo, and that give him more hopes of an elusive title after losing the final twice. “Yes, we have a more balanced squad and DJ’s arrival has given us more balance. We will do our best to win the title, but it will depend on how we play the last matches. We have a full-strength and we will do our best to win the title.”
Quetta also boost of a very strong batting line-up with Shane Watson on top of the run charts with 352 in 10 matches. The former Australia all-rounder will hope to make his first visit to Pakistan for HBL PSL memorable in the last round with big scores. Umar Akmal (255 runs), Ahmed Shehzad (252) and Rile Rossouw (245) make the top-order strong, while Sarfaraz, Bravo, Anwar and Mohammad Nawaz make the middle and lower-order formidable.
Quetta bowling is led by ever-green Twenty20 globe-trotter Sohail Tanvir who has 15 wickets while spinner Nawaz has 11. The newly emerged (also selected for Pakistan against Australia for ODIs) Mohammad Hasnain remains a threat with his speed. Peshawar will be happy at the return to form of Kamran Akmal who smashed a 48-ball 86 against Karachi in the last league game, while Imam-ul-Haq, Liam Dawson, Darren Sammy and Kieron Pollard can also be depended on when needed.
Peshawar’s pace attack is their strong point as it can pose big challenge for Quetta’s batting. Hasan Ali leads the wicket chart with 21 wickets in 10 games and is ably complemented by Wahab Riaz (13 wickets), Sameen Gul (nine), Umaid Asif (seven) and Tymal Mills (five).
Peshawar captain Sammy hoped his pace attack and Kamran win him more matches. “Kamran is our match-winner and is backed up by pace attack led by Hasan. It’s nice to see Wahab Riaz giving him full support,” said Sammy.
“It will be tough to score against our fast bowlers.”