After getting defeated by Karachi Kings by one run, Quetta Gladiators had their net PR decreased with 0.376 while maintaing their top sot. 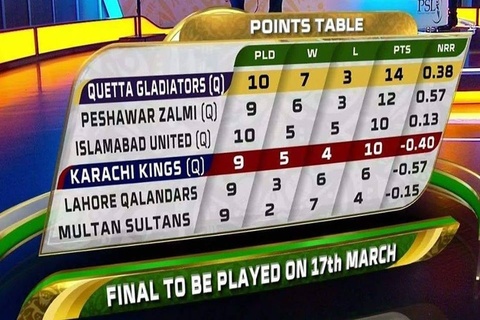 HBL PSL Pakistan Super League 2019      National Cricket Stadium, Karachi
After getting defeated by Karachi Kings by one run, Quetta Gladiators had their net PR decreased with 0.376 while maintaing their top sot. Karachi Kings on the other hand, has an extra point bringing them to 10 with a net PR of -0.403.
Quetta Gladiators remained on top with 14 points followed by Peshawar Zalmi with 12 points while Islamabad United regained third place after their 49-run victory over Lahore Qalandars in the 27th T20 match in the fourth edition of the Pakistan Super League (PSL) at National Stadium Karachi.
Both Quetta Gladiators and Peshawar Zalmi have one match left each while Islamabad United are the only team to complete their ten matches in the tournament. They have won five matches and lost as many matches, securing 10 points with an NRR of 0.127.
The Gladiators won seven and lost only two matches with a net run rate of 0.423 while the Zalmi won six and lost three matches with an NRR of 0.566.
Karachi Kings comes fourth with eight points and an NRR of -0.459. They have played eight matches, winning four and losing as many matches, with two matches remaining.
Lahore Qalandars are placed fifth with six points (NRR 0.566) from nine matches. They won three and lost four matches with one matches left. However, it is difficult for them to qualify for play-off even if they win their last match.
Multan Sultans, whose last game is against Lahore in Karachi, are at the bottom of the table - placed sixth with two wins and seven losses in nine matches.