Opener Ahmad Shehzad struck a solid half century and leg-spinner Fawad Ahmed took three crucial wickets to guide Quetta Gladiators to a convincing 43-run win over defending champions Islamabad United in Abu Dhabi on Tuesday night. It was the last match of the UAE-leg of the HBL Pakistan Super League. 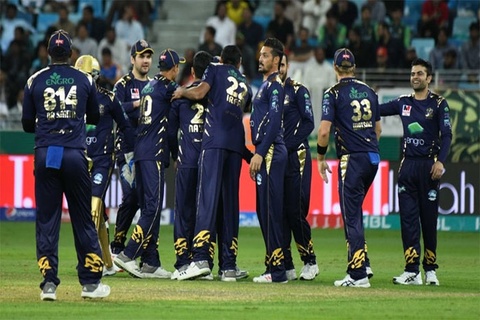 HBL PSL Pakistan Super League 2019      National Cricket Stadium, Karachi
Opener Ahmad Shehzad struck a solid half century and leg-spinner Fawad Ahmed took three crucial wickets to guide Quetta Gladiators to a convincing 43-run win over defending champions Islamabad United in Abu Dhabi on Tuesday night. It was the last match of the UAE-leg of the HBL Pakistan Super League.
Quetta were helped to 180-9 by a brisk 46-ball 73 from Shehzad, his second successive fifty in HBL PSL 4, but no other batsman managed to score big. Pakistan-born Australian Fawad chipped in with 3-26 to restrict Islamabad to 137-9.
This was Quetta’s seventh win in nine games, assuring them a top-two finish in the league. They are currently at the top of the six-team table. Peshawar, with 12 points in nine matches, are second.
Luke Ronchi top-scored for Islamabad with a 43-ball 64, studded with three sixes and seven boundaries but it was not enough for Islamabad United. The defeat left twice winners Islamabad in a spot of bother with eight points in nine games (five defeats and four wins) as they are placed third.
Karachi are fourth with eight points (four wins and four losses in eight matches).Lahore are in the relegation zone currently occupying fifth spot, having registered just six points in eight games. They have lost five and won three out of eight matches.
Multan Sultans are sixth with just four points in nine games (seven defeats and two wins).Chasing a daunting target on a tough Sheikh Zayed Stadium pitch, Islamabad had raced to 62 in the ninth over before wickets started falling.
Fawad had Cameron Delport stumped by Sarfraz Ahmed for 25 that came off 24 balls with four boundaries.Two more wickets fell in the space of three runs, as Fawad bowled Phil Salt (two) and from the other end Mohammad Nawaz had Asif Ali for zero.
Ronchi and Samit Patel (14) added 35 but young fast bowler Mohammad Hasnain claimed Patel and Faheem Ashraf in the same over.In between, Fawad had Ronchi caught off a miscued drive to end Islamabad’s hopes.
Quetta’s innings was anchored by Shehzad. He cracked nine boundaries and a six in his knock during which he first put 38 for the second wicket with Azam Khan, who made 12. He added 46 with Rilee Rossouw, who made 23 with two boundaries and six.
Umar Akmal scored 17-ball 27 with three sixes and a boundary but Quetta lost seven wickets for 82 runs which stopped them from reaching the 200 runs mark. Islamabad pacer Faheem Ashraf took 4-18 in his three overs, while Amad Butt grabbed 3-40.The league will now shift to Karachi for the last eight matches, beginning from March 9.