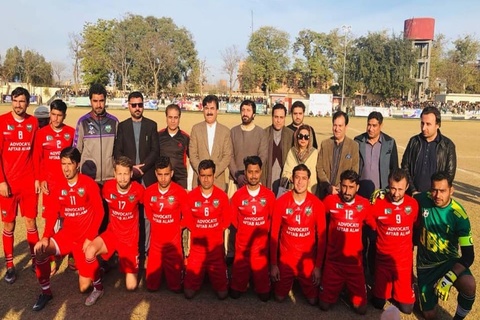 The match started on fast tempo and it was North Waziristan Agency right winger Mustafa slammed in a beautiful goal through field attempt ha he got a free ball from his mid-fielder Yasir and zoomed quickly toward the danger zone and netted a fine goal to make the tally 1-0.


After taking lead, North Waziristan Agency put in more pressure to double the lead but failed because of the excellent goal-keeper of national team Jaffar Khan who saved three easy goal-scoring chances. Jungal Khel Kohat's Rasool then dispatched a quiet good opportunity to kick from the long distance making the half-time score 1-1 for both teams.

It was the second session in which Jungle Khel Kohat kept up more pressure to take the lead further and with the combine move this time Mansoor netted a fine goal through field attempt along with inners Ghazi and Amir, zoomed quickly toward the goal-post where he slammed in a superb goal to make the tally 2-1.

After 10-minute Rasool also got another chance of scoring but this time his left foot attempt was nicely intercepted by NWA goal-keeper while diving to his left. Former Pakistan team skipper and goal-keeper Jaffar Khan also played well for Jungle Khel Kohat and did not allow any forwards of NWA to level the tally 2-2. Thus Jungal Khel won the match by 2-1.

The second semi-final will be played today in which Peshawar Youth and defending champion Shinwari Stori will compete hard for the spot in the final of Tabdeeli Football Cup 2019.

Speaking on this occasion, Minister for Information, Shoukat Yousafzai lauded the organizing committee for holding such a big event in which teams from across Pakistan are taking part.