Peshawar Youth, Shinwari Storee and Jungle Kheli Kohat defeated their respective opponents and advanced to the semi-finals games of Tabeeli Football Cup 2019 which is being held at Tehmash Khan Football Stadium in Peshawar. 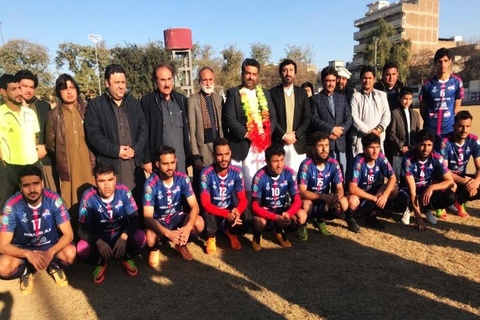 Tabdeeli Football Cup 2019      Tehmash Khan Football Stadium, Peshawar.
Three goals each by international footballers Mansoor and Rasool Khan guided star-studded Jangal Khail Kohat to a final score of 6-0 that earned them victory against DC Khyber Green team.
Having services of all Pakistan team including star goal-keeper Jaffar Khan, who also remained skipper of the national team, Jungel Khel Kohat boys played some serious attacking game and did not give much room to their rivals to strike back.
It was in the 6th minute when left winger Rasool netted a fine goal through field attempt and Rasool made a combine attack with inners Ghazi and Amir and zoomed quickly toward the goal-post where he slammed in a superb goal to make the tally 1-0.
After 10 minutes of his first goal, Rasool scored another to further enhance the score to 2-0 and it was in the 22nd minute when Rasool scored his third goal including making a hat-trick. Jungel Khel Kohat was leading by 3-0 at half-time. DC Khyber Green also tried their hard to reduce the margin but they were failed due to man to man marking.
After leading 3-0, the leading team put in more pressure and scored three more goals when center striker Mansoor slotted 3 consecutive goals including the second hat-trick of the Cup. The front-line featuring Zia Ur Rehman, Azhar, Aamir and goal-keeper Jaffar were the star players for the winning team throughout the match.
While the 3rd and 4th quarterfinal matches saw Shams United falling to Peshawar Youth by 1-2 thus Peshawar Youth making their way to the semi-finals and also Shinwari Stori earned a hard fought victory over DC Khyber Whites by 1-0 and booked their place in the semi-final stage, respectively.
Member Provincial Assembly, Muhammad Fahim Khan was the honorable chief guest along with Director Development, Khyber Pakhtunkhwa, Niamat Ullah Marwat and Chief Organizer Shahid Khan who witnessed the second quarterfinal game played into the cup.
The first semi-final game will be played today at 02:30 PM.