North Waziristan Agency won on a close call of 1-0 against Islamia University to book their place in the semi-final stage of Tabdeeli Football Cup 2018/19 which is being held at Tehmash Khan Football Stadium in Peshawar. 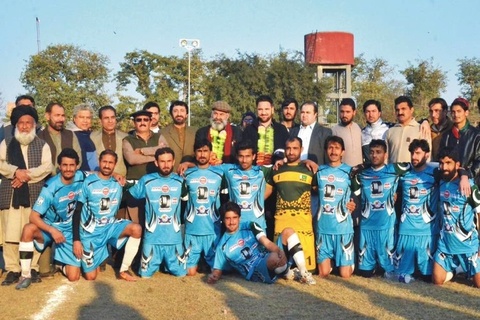 The two teams made some incisive rallies of attacks with Rehman from Islamia University saving three easy goal scoring opportunities of North Waziristan forwards and played a key role in keeping the spirit of the team high as they raided first on the rival goal-post but Adnan rescued North Waziristan by protecting his team from falling to them.
It was in the 9th minute when Ihtisham made a fine inroad with the help of right winger Mohsin and quickly zoomed toward the rival goal post but goal-keeper Adnan came and rescue his team with spectacular save while diving to his left. Hamza and Saqib also made some good attacking moves as they came closer to score but due to excellent goal-keeping of Adnan who yet again saved three easy goal scoring chances.
On the other hand for North Waziristan Agency their front line featuring Umar Ayub, Raza Ullah, Jamil, Abdul Rehman, Sami Ullah and Rasool played with their best moves and extreme speed on the ground but the two teams were locked a goal-less first session draw and also failed to score till the 40th minute played into the second session.
It was Sami Ullah who netted a forceful kick from the 25-yard distance which did not give any chance to the opponent goal keeper to intercept and thus the ball landed beautiffully into Islamia University's net favoring the victory for North Waziristan team by 1-0.
Assistant Commissioner Landikotal Tehsil, Khyber District, Muhammad Imran Khan was the honorable chief guest who witnessed the first quarterfinal match played into the league, along with Chairman Organizing Committee, Shahid Khan Shinwari, former Pakistan football team skippers – Najeeb Ullah Najmi, Basit Kamal and Gohar Zaman and officials.
Speaking on this occasion, Muhammad Imran Khan lauded the efforts of the organizing committee for holding the Cup. He said through this Cup many new players would be able to come up at national and international levels.
The second quarterfinal match will be played today between Jungle Khel Kohat and DC Khyber Greens at 02:30 in the afternoon.