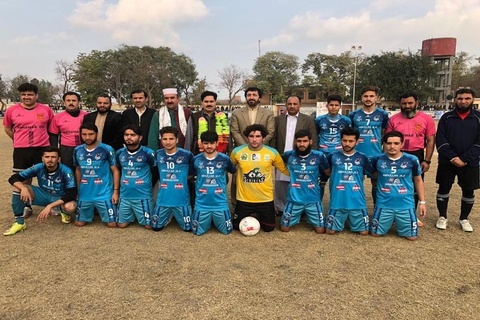 Tabdeeli Football Cup 2019      Tehmash Khan Football Stadium, Peshawar.
Khyber DC White football team recorded a convincing 2-0 victory over Hayatabad Champions team as the winning team exploited the vulnerable side of losing team’s players crushing them with two goals which left them no room to score for their side.
Losing team’s footballers missed out on several opportunities to goal as the goal-keeper from Khyber DC White side was coming out strong blocking all their attempts.
While in the second encounter, North Waziristan team faced Bajaur football team in the 12 match played yesterday in which North Waziristan footballers though their excellent foot play registering another win in the league on a close call of 2-1 score line. North Waziristan team competed hard with all the players performing with their best even though the losing side was also playing strong protecting their goal post quite well.
The losing team however, thwarted a lot of certain goal scoring opportunities; the players were not able to convert much of their attempts into goals for their team but the consolation goal for them proved their strong play in the match.
The 2019 Tabdeeli Football Cup is featuring a total of 13 teams from which players belonging to their respective teams are seen competing against each other so as to win top honors in the league.
Shinwari Storee is defending the title and besides Shinwari Storee, Shams Green, DC Khyber Green, Young Stars Bajawar, Hayatabad Champions, Peshawar Youth Stars, Khyber DC White, Khyber DC Blues, PK-72 Tiger, North Waziristan, Kurram Shaheen, Islamia Zalmi, Star Jangal Khail, Kohat are also taking part.