Peshawar Youth and Shams United teams defeated their respective opponent by 2-1 and 3-1 in the 9th and 10th match played in the on-going Tabdeeli Football Cup 2018/19 which is being held at Tehmash Khan Football Stadium in Peshawar. 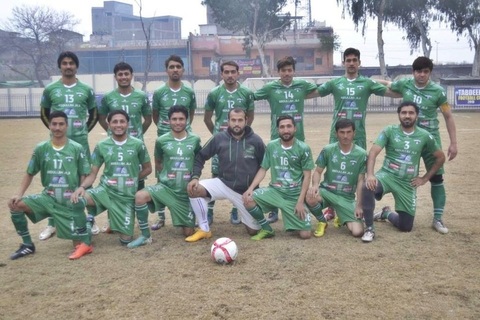 Peshawar Youth team won on a close call against DC Khyber Greens by 2-1 score line. Peshawar Youth footballers laid the platform for a win which was sealed with their two goals as the losing team kept failing at their attempts and their poor goal keeping and falling defence let the winning team players enjoy the victory of the match.

Yousaf opened the scoring tally for Peshawar Youth team by slotting past the opponent team players and landing his perfect strick in the 25th minute and Tariq managed to score the winning goal for his team at the 45th minute enhancing the score line by 2-0.

Peshawar Youth players stayed on the ground quiet firm and did not let the opponent team scored for much of the match but even though DC Khyber Greens players were performing with quiet good foot work but they did not initially show the required intensity to build on the goal and netted the only goal for their side through Afaq Khan in the dying moments of the match.

In the 10th match played into the league, Shams United team defeated Khyber Blue team by scoring 3 goals against the opponent's only one which left them empty handed at the end of the scheduled time.

Shams United team took a surprise lead in the first half when Farhan netted the very first goal for his team in just the 14 minutes into the game to which Maroof Shah doubled their lead in the 25th minute. Farhan then incredibly landed the 3rd and winning goal for his team in the crucial minutes of the match and finished it as 3-1.
The losing team’s players were frustrated throughout the play as despite their enormous attempts and having several chances to score, missed with their efforts saved by the winning team’s perfect defence and goalkeeping each team. They could have scored as they had much time but their players wasted all their chances to net past anymore goals in the winning team's goal post.
Tariq Khan of Khyber Blue received foul play warning twice and further was given a red card and it was not only him but other two players from the losing team also got a yellow card warning, namely they are Farid and Naimat which proved the losing team’s wasteful performance in this match. Javed Iqbal was the sole player to score the consolation goal for Khyber Blue.
Today, Shinwari Storee will meet Pk 72 football team at 03:30 PM in the 11th match at Tehmash Khan Football Stadium in Peshawar.