North Waziristan crush Hayatabad Champions 3-0 while Shinwari Storee held Islamia University in a goalless draw in the on-going Tabdeeli Football Cup 2018/19 which is being played at Tehmash Khan Football Stadium in Peshawar. 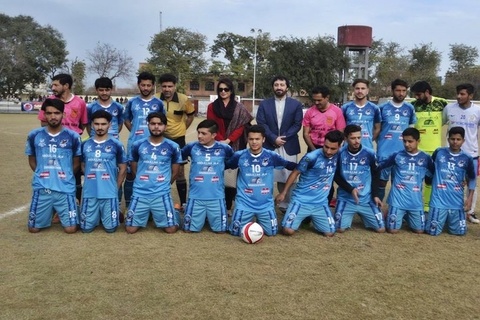 Both teams were not able to score against eachother as playrs from both sides did not allow the attempts from either sides to pass through their goal post and ended the match in a goalless draw. Also, Awais of Shinwari Storee was warned with a yellow card in the 29th minute while Saqib of Islamia University for given a red card in the crucial moments of the game.

In the other encounter, North Waziristan boys proved of their talent and came out stronger than ever as they crushed the opponents on a 3-0 score-line.


North Waziristan were on the run from the moment match started as they took advantage of the low goal keeping and less speed of Hayatabad Champions team and slotted the ball in the enemy net thrice to their failing goal keeping. It was not possible for the losing team to get out of the pressure imposed on them by the winning team as North Waziristan team kept coming with goal one after the other and finished the match in their favor convincingly by 3-0.

The 2019 Tabdeeli Football Cup is featuring a total of 13 teams from which players belonging to their respective teams are seen competing against each other so as to win top honors in the league.