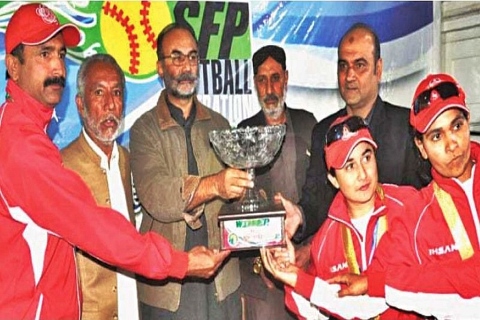 The 14th edition of National Women’s Softball Championship was organized by Softball Federation Pakistan (SFP) which was hosted by Baluchistan Softball Association (BSA) along with Baluchistan Sports Board which concluded successfully after three days of action. This championship featured a total of seven (7) teams belonging to Pakistan’s leading departments and as well as provinces.

Participating teams included: Army, WAPDA, Sindh, Punjab, Baluchistan, Khyber Pakhtunkhwa and Federal Capital of Pakistan; Islamabad.
In the final match played into the championship, Army team overcame WAPDA convincingly by an innings and five runs which helped them to clinch the championship title. Although Army team’s win was easy as the players gave their all, dominating the championship but WAPDA being one of the strongest team, its players kept coming back making their way forward against the winning team time to time and scored four runs in the four innings with Rabia, Iqra, Sana and Ume Hani scoring one run each.
But in the end Army finished the game scoring nine runs in its six innings in which Alia Saif and Fariha Nayab scored two runs each and Atia Ishaq, Irun Khald, Humaira Khan, Rashida Parveen and Zahida Ghauri managed to score one run each. The winning team’s pitcher Sadia Bibi and catcher Sadia Begum also proved to be the key players in this huge win for their team.
Meanwhile, Punjab team bagged the bronze medal with their star players Raheela Ilyas being declared as the best player of the tournament.
Former Senator, Nawabzada Lashkari Raisani was the chief guest along with Director General BSB, Ali Gul Kurd, SFP President, Haider Lehri and Secretary, Asif Azeem and BSA Secretary, Naseem Khan who distributed medals, shields and trophies among high achievers of the championship.