NBP qualifies for the semi finals of the PFF Cup 2016

NBP defeated SSGC on penalties to make heir way through the semi final of the PFF Cup 2016. 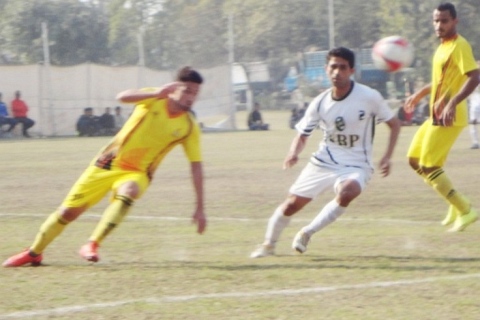 With three goals, Saadullah had been the driving force in Sui Southern Gas Company’s (SSGC) run to quarter-finals of the Pakistan Football Federation (PFF) Cup.

Tightly marked by National Bank of Pakistan (NBP) in their last-eight clash at the Raiders Football Club Ground in Lahore on Wednesday, the Pakistan international striker couldn’t inspire the second-division side against their top-flight opponents.

“They had a man who wasn’t affording me any space,” Saadullah told Dawn after the match which NBP won 3-2 in an enthralling penalty shootout, in which the SSGC striker missed his spot-kick, following a goalless draw after extra-time.

And while SSGC’s match-winner couldn’t inspire his side to what would’ve been a remarkable victory, NBP’s main man came good — goalkeeper Mohammad Omar saving three penalties in the shootout.

“He [Omar] showed exactly why we rate him so highly,” NBP head-coach Nasir Ismail told Dawn after the match. “Our defenders had given us a good chance by marking Saadullah in 120 minutes and then it was up to Omar in the shootout and he didn’t disappoint.”

NBP advance to a last-four clash against Pakistan Army on Satu­rday 20 February at Punjab Stadium while SSGC and Saadullah were left to rue a big chance.

“It was a big chance for us to show how we’ve come so far as a team,” Saadullah said. “But I still think we’ve shown that we can play against the big boys. It was just bad luck in the end.”

After both teams cancelled each other in an end-to-end 120 minutes of football, the excitement went to the penalties.

Maqbool put NBP ahead before Saadullah saw SSGC’s first penalty saved by Omar. Adil Ahmed then struck the crossbar with his penalty before Mohammad Lal levelled matters for SSGC.

Sanaullah and Bilawal-ur-Rehman then traded penalties and after Mohammad Asif netted with NBP’s fourth spot-kick, Omar saved from Hameed Khan.

Faisal Iqbal had the chance to win it for NBP but skied his spot-kick, giving Umair Ali the chance to send it to sudden death but Omar proved to barrier too big for him