Nepal trashes Pakistan by 12-0 in the second match of SAFF U-18 Women’s Football Championship 2018 which is being played at Changlimithang Stadium in Thimphu, Bhutan. 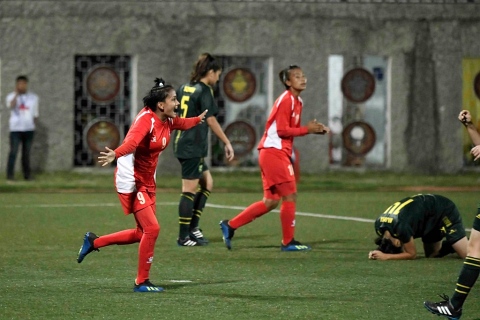 Pakistan was up against Nepal in its first match of SAFF U-18 Women’s Football Championship 2018 in which Nepal crushed Pakistan by scoring 12 goals and leaving Pakistan empty handed at the end of the scheduled time.

From the first whistle Nepal started aggressively with waves of attack at Pakistani team and ended the match being a one-sided affair as Nepali goal keeper was hardly troubled at any point of the game. Anuska Sherpa opened the tally for the winning team as she slammed the very first goal in just the 7th minute into the game.
Pakistan was resilient and well-organized for most of the game but the players were seen making very little progress in changing the score board because Nepali girls made several attempts with their shots and got successful at most of their chances but Pakistan’s poor defense let them gain the victory of the match.
Sabita Ranamagar scored at the 13th minute making it a consecutive two goals for Nepal whereas Rekha Poudel scored 7 goals in total and was named the most valuable player of the match.
Pakistani players' performance was much of a noticeable cause as both the teams were coming off strong in the entire match but Nepal showed no mercy as they crushed Pakistan on 12-0 score-line.
After returning back to participate after a long stretch of three years with so much time to have practiced, it was a descending moment for team Pakistan losing their first match into the championship.