Multan triumphs over Sahiwal to win the title of Punjab Inter-Divisional U-15 Football Cup 2018 which was played at Punjab Football Stadium, Nishtar Park, Lahore. 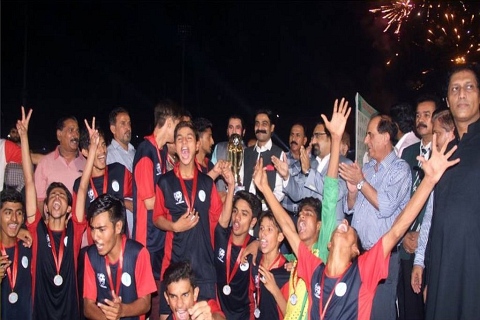 Multan locked horns against Sahiwal in the final of the Punjab Inter-Divisional U-15 Football Cup 2018 in which Multan managed to seal the victory against Sahiwal division through penalty shootouts by 5-4.

In an end-to-end game, both teams fought evenly for most of the match, with chances at either side displaying splendid game play. Both halfs of the match finished in a goalless draw as the regulation time ended. Penalty shootouts therefore determined the outcome of the final clash.
Multan football players showed superb game play in the final part of the match by taking the leads on goals converting all their penalty attempts into scores for their team. However Sahiwal FC also exhibited good performance as they were able to net the 4 goals out of their 5 penalty attempts. Saqlain Mansoor hit the ball at the last penalty but Multan side’s goalkeeper ensured to not get threaten by the opponent side taking the win for Multan on 5-4.
Punjab Sports Minister, Taimoor Khan and Director General Sports Punjab, Muhammad Aamir Jan were the guests of honor at grand closing ceremony and distributed prizes among the prominent performers of the championship. The winner team was awarded with a trophy and 1,80,000 PKR whereas the runner ups pocketed 90,000 PKR as well as a trophy.
Huge celebrations were witnessed billowing in Multan side’s stands as Multan football players proved too good for Sahiwal players recording a convincing 5-4 victory to claim the title of the championship.