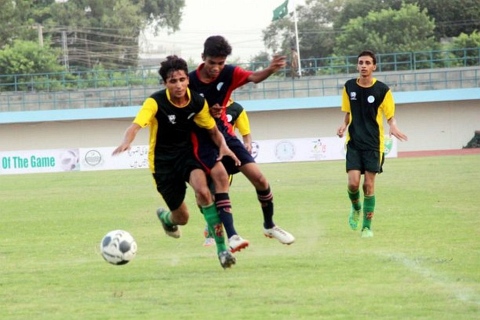 Sahiwal division players fought hard against their opponents; starting the match on the high as they scored three and two goals through Hammad Sajjad and Abdul Qadoos and finished the match in their favor to lock the top honor in three divisions. Gujranwala and Bahawalpur football club tried their best but their performance was not managed well as they were not able to score a single goal.
In the matches played earlier, Lahore thrashed Rawalpindi by a big margin of 5-0. Lahore football club showed incredible ball control right from the beginning and did not give their opponents any room to settle down. Lahore’s striker Mehdi netted three goals while Waqar and Hashim scored two goals each.
In another match, Multan trashed Sargodha by 4-0. Multan’s Mohabbat Ali struck two goals in 14th and 50th minute while Muhammad Sami and Adnan Justin contributed one goal each and cruised to a comfortable win.
Bahawalpur will now face Gujranwala in their group C match today at 04:30 PM while Sargodha will compete against Faislabad in their group B match at 07:00 PM.