Australian Open 2016: Serena vs. Maria in the quarterfinals

Well, some would argue it was always the American's to lose, given she has won 21 grand slam titles and was by far the standout women's player in 2015. She came within two matches, of course, of achieving the rare calendar-year grand slam. 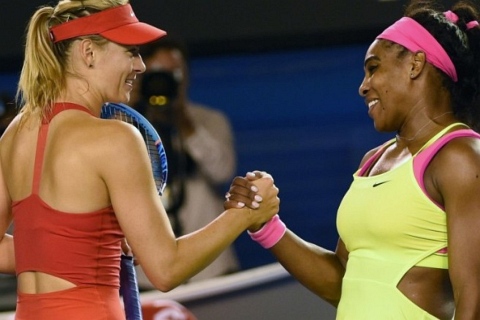 Well, some would argue it was always the American's to lose, given she has won 21 grand slam titles and was by far the standout women's player in 2015. She came within two matches, of course, of achieving the rare calendar-year grand slam.

But after Sunday's play in Melbourne, none of the three players that downed Williams last year -- Belinda Bencic, Petra Kvitova and Roberta Vinci -- remain in the tournament, and the knee injury in early January that threw the world No. 1's Australian Open preparations for a loop appears to have settled nicely.

The 34-year-old cruised into the quarterfinals by beating Margarita Gasparyan 6-2 6-1 and set up a clash with Maria Sharapova in a matchup that is justifiably hyped but rarely delivers on the court.

It pits the world's richest female athlete, Sharapova, against Williams, who many would argue is the greatest women's tennis player the sport has ever witnessed.

Williams has won 17 straight matches against Sharapova, including last year's Australian Open final. Sharapova managed to make the second set close, taking proceedings to a tiebreak, but when they squared off in the Wimbledon semifinals months later the Russian was always playing catchup and exited in straight sets.

Sharapova defeated rising Swiss star Belinda Bencic 7-5 7-5 to advance to the last eight, playing the match ahead of Williams on Rod Laver Arena with the roof closed due to rain. The roof was opened for Williams' 55-minute work out.

The Russian enjoyed one of the best serving days of her life, harkening memories of her form prior to a career-threatening shoulder injury in 2008.

This, however, might be a good omen for Sharapova: Last year in the Australian Open quarterfinals, Tomas Berdych ended a 17-match losing streak against Rafael Nadal.

Yet the slumping Nadal is at a different stage of his career than Williams.

"You're always trying to improve," Sharapova, a five-time grand slam winner, told reporters. "I got myself into the quarterfinal of a grand slam.

"There's no reason I shouldn't be looking to improve and to getting my game in a better position than any other previous round. It's only going to be tougher, especially against Serena."