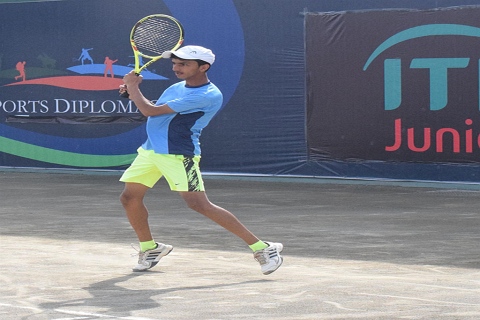 
A major setback was seen on the second day of event as unseeded Pakistani Mohammad Shoaib stunned third seed Indian player Neema Arthav in straight sets by 6-1, 6-2. Mohammad Shoaib was in fine touch as he did not allow the rival Indian to settle down and play freely. Neema had no answer of the powerful forehand and backhand shots as in frustration, Neema broke his racket after losing the match and was penalized by ITF supervisor.


Another Pakistani was eliminated as second seed Malaysia’s Suresh Darrshan defeated Mossa Chaudhry without facing any trouble by 6-1, 6-2.
Qualifier from Pakistan Huzaifa Abdul Rehman created quite a stir as he overpowered sixth seed Nouman Aftab in straight sets by 6-3, 6-4. Another Pakistani player Saqib Hayat through to the quarters after eliminating Wen Yi Chou of Chinese Taipei in a well contested three set match by 3-6, 6-3, 6-4. Saqib was down to one set but he never gave up as he won the next two sets to stamp his authority over his opponent to win the match.


Rattanan Siritaworchar of Thailand after registering victory over his Pakistani opponent Ahmed Asjad Qureshi in a hard fought three set match, moved into the quarterfinals. Ahmed won the first set and he was leading by 5-2 but then he lost the pace of the match as Rattanan not only equalized the match but also outplayed Ahmed on the tiebreak. The thriller continued for 150 minutes.