Punjab’s women stamped their authority as the boxers won the title of first ever women boxing championship at WAPDA Sports complex, Lahore. 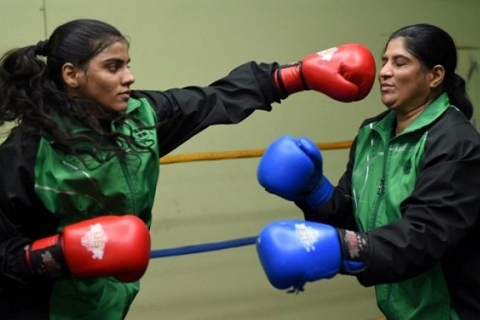 Women from Punjab showed the power and techniques and displayed fine performance to win the inaugural women boxing championship. Punjab scooped 2 gold in 57-60 kgs and 69-75kgs out of three and grabbed 1 silver. Sindh was the other team who denied Punjab from winning the 3rd gold in women fly 48-51kg fight.


Sindh with a gold secured the second spot while KP and Balochistan with 1 silver and 1 Bronze shared third position and with 2 bronze, Islamabad ended on fourth place.


Razia Bano from Sindh was the first boxer ever who won the gold medal in women boxing championship at national level.

Secretary Punjab Sports Board Muhammad Aamir Jan was the chief guest of the occasion and he awarded the medals to the winners. President Pakistan Boxing Federation / Secretary General, Muhammad Khalid Mahmood, Pakistn Olympic Association and Saqlain Zahoor Raja, Director General, WAPDA Sports Board along with other dignitaries were also present on the occasion.