HBL PSL 6 will now dominate the television screens over the next 16 days at the Sheikh Zayed Stadium, Abu Dhabi. 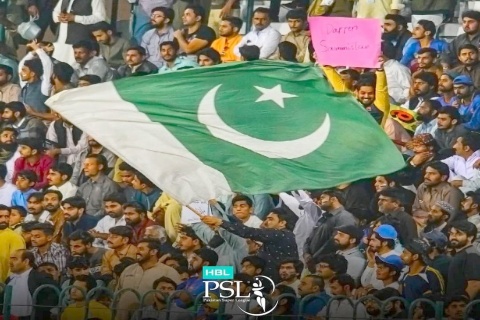 The HBL Pakistan Super League is a resilient event that gets stronger and bigger each year. The 2021 edition is a perfect example of this statement when its resumption overcame all logistical and operational challenges and hurdles to be ready to reconnect with its fans and supporters. HBL PSL 6 will now dominate the television screens over the next 16 days at the Sheikh Zayed Stadium, Abu Dhabi.

On 9th June (Wednesday), Lahore Qalandars and Islamabad United will go toe to toe with the match to start at 2100 PKT time (2000 UAE time). This will be their first encounter in the HBL PSL 6 with their repeat match scheduled for Sunday, 13 June.

Both Qalandars and United, along with Karachi Kings and Peshawar Zalmi, are locked at six points apiece. But, the two sides have played one less match as compared with Kings and Zalmi, meaning Wednesday’s winner will go top of the points table after halfway stage in the competition.

The last three games of the 2018 edition were held in Pakistan, last eight matches of the 2019 event were held in Karachi despite the closure of air corridors and operational challenges following the Pulwama incident.

The entire 2020 tournament was held from start to finish across four Pakistan venues despite an interruption due to the Covid-19 outbreak. In the 2020 tournament, a large number of foreign internationals participated, including those who had previously refused to travel to Pakistan.

Their participation was a testament and endorsement of the security situation in Pakistan as well as trust and confidence over Pakistan’s security as well as the Pakistan Cricket Board.

The challenges from the remaining 20 HBL PSL 6 matches emanated from Pakistan, Sri Lanka, India and South Africa being on the United Arab Emirates’ red-list. A number of exemptions and approvals were obtained, some of which were revoked at the last-minute.

Nevertheless, with the support of the Abu Dhabi and Pakistan Governments, Abu Dhabi Sports Council and the Emirates Cricket Board, the PCB was able to resolve all outstanding matters and is now ready to take this thrilling and fast-paced cricket to its fans through digital media as the event will be held in front of empty stands.

However, the PCB has committed that the 2022 tournament will be held in Pakistan and with the improved Covid-19 situation, it is envisaged the matches will be in front of the crowds.

Like the tours to England and the West Indies and upcoming home series against New Zealand and England, the HBL PSL 6 will help the players as well as selectors and coaching staff to edge closer to giving final shape to their side for the ICC Men’s T20 World Cup, which is expected to be played in the UAE.

The event is ready, the players are raring to go and so are the fans to get behind their favourite cricketers and side as the next 16 days, the talk will be HBL PSL 6 and who will be lift the glittering trophy on 24 June under Sheikh Zayed Cricket Stadium lights. For now, both Qalandars and United’s camps are ready for the action on Wednesday night

Lahore Qalandars captain Sohail Akhtar: “We are really excited about restarting the HBL PSL 6 at the Sheikh Zayed Stadium, Abu Dhabi. This venue has been a lucky one both for me and the team.

“We have worked hard and have gauged the conditions well in the last few days. We have a formidable squad despite the changes in our foreign players and we will play the brand of cricket that has helped us make a big impact in the last season as well as the Karachi-leg of the HBL PSL 6.

“All teams are balanced in the tournament and I am sure we will see some real quality cricket, in the Qalandars camp, we are fully focussed on winning the trophy.”

Assistant Coach Islamabad United Saeed Ajmal: “We have been practicing for the last four, five days, the team looks well prepared and gelled together. We are fully prepared for the match tomorrow, having practiced hard under the floodlights too. We have gauged the conditions well and hope to give our best on 9th June.

“Our players look fit and are raring to go, Hasan Ali has looked in great form and rhythm and so has Faheem Ashraf. Colin Munro has also looked in good shape in the nets. I am very confident that we will give Lahore Qalandars a tough time in the match.”