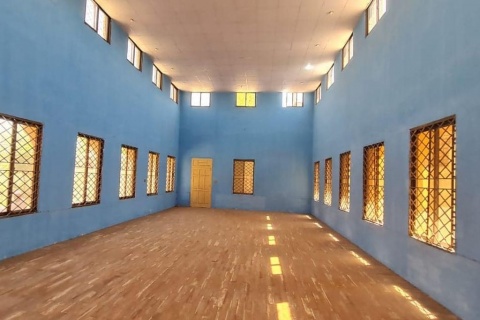 This was stated by Project Director Prime Minister 1000 Playground Facilities Murad Ali Mohmand while talking to media men during his visit to monitor the overall pace of work on the completed projects and those on which currently construction work continues.

He said, the team of Project Management Unit (PMU) of Development of 1000 Playing Facilities in KP including Deputy Director P&M Amir Muhammad Bettani, Director GIS Syed Zahid Ali Shah, field engineers Paras Ahmad and Umar visited Regional Sports Officer Mir Bashar, District Sports Officer Afzar Ahmad are her to make a complete report of the completed projects besides monitoring quality and pace of work on the other ongoing projects in District Mardan and submit the same to Secretary Sports Abid Majeed and Director General Sports KP Asfandyar Khattak to present it to the Chief Minister KP.

He said as directives of the Chief Minister Khyber Pakhtunkhwa Mahmood Khan to provide equal opportunities to the female players of the province, the completion of an international stand badminton hall with multiple facilities completed in Girls College Par Hoti Mardan besides a playground in Toro.

Murad Ali Mohmand said that Secretary Sports Abid Majeed and Director General Sports have already checked the quality of work during their constant visits to different ongoing schemes to ensure healthy playing facilities to both male and female and they had expressed satisfaction over the pace of work.

He said, both the projects were completed a month earlier from the time given earlier on and appreciated the PMU team and constructors for their hard work.

He said two schemes were completed, which included Badminton Hall at Girls College Par Hoti Mardan and Toru Playground Mardan. The field engineers of the PM 1000 Playground Facilities along with the PMU team checked the scope of work as per PC-I and a report of its handing and taking over would be prepared before handing over to the Directorate of Sports KP for playing purposes.

He said, the field Engineers Paras Ahmad and Umar Shehzad will submit the technical report by Friday (May 28, 2021) and will submit it to the DSO Mardan for the handing and taking over.

When contacted, Chief Minister Khyber Pakhtunkhwa, Mahmood Khan said after completion of the ongoing projects across Khyber Pakhtunkhwa in the light of the vision of Prime Minister Imran Khan is to provide the playing facilities to each Union Council of KP to promote health sports culture among the youth.

The PMU will close up to 100 playing facilities till June 30, 2021. Besides visiting the playing facilities, the PMU team also inspected the Special Person, a project for the first time initiated specifically meant for Persons with Different Abilities in Pakistan, and checked the ongoing grass work and leveling. The facility would be ready for playing purpose by July 2021 and Khyber Pakhtunkhwa will become the first province to have such facilities for the Persons with Different Abilities in Pakistan.

Director General Sports KP Asfandyar Khattak said it would be another promise made by the Chief Minister KP with the Persons with Different Abilities to fulfill after the completion of the ground. He said steps have been taken to ensure due facilities for the Paralympic Athletes.