The Pakistan wicketkeeper-batsman Mohammad Rizwan was rewarded for his incredible run in T20Is in 2021 with the bat when he achieved his career-high ranking by making his first-ever entry in the top ten. 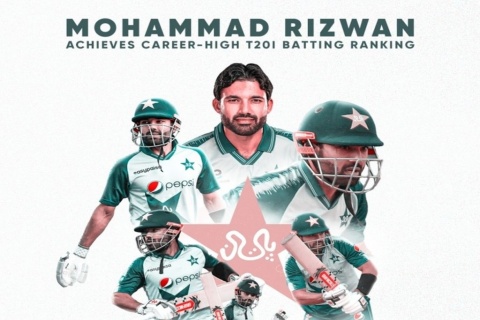 Mohammad Rizwan was rewarded for his incredible run in T20Is in 2021 with the bat when he achieved his career-high ranking by making his first-ever entry in the top ten. The Pakistan wicketkeeper-batsman now sits at the 10th spot in the ICC T20I Player Rankings following a series of phenomenal outings in South Africa and Zimbabwe.

The right-handed batsman scored 186 runs – which included two unbeaten knocks of 82 and 91 – at a staggering average of 186 in the recently-concluded three match series against Zimbabwe in Harare.

In South Africa, where Pakistan defeated the home side 3-1 in the four-T20I series, Rizwan averaged a brilliant 73.50 – the best amongst the top-five run-getters from both sides – as he brought up his 147 runs – at the back of two half-centuries – at a strike rate of 147.

The 28-year-old is in a sublime form since the turn of the year. In 10 T20Is in the 2021, he has scored 530 runs at an extraordinary average of 106. His outings include a thundering century against South Africa in Gaddafi Stadium Lahore and five half-centuries. This splendid performance provided him a rise of 149 ranks in the ICC T20I ranking. During this four months period, he has earned 408 rating points.

The wicket-keeper batsman has bounced above England captain Eoin Morgan and wicketkeeper-batsman Jonny Bairstow. Both are regular players of England T20 side, against which Rizwan's Pakistan has to play after two months as part of their next bilateral T20I assignment.

Babar Azam is the other Pakistan batsman in the top 10 ICC T20I Player Rankings as the Pakistan captain sits at number three.

Four wickets in the series at an economy rate of 6.63 has helped fast bowler Haris Rauf jump 17 places to 21st spot and five wickets with the economy rate of six took Mohammad Hasnain to 65th place – which his compatriot Usman Qadir, the leg-spinner, shares with him – with a 52 places jump.