Central Punjab is on course to defend their title in the final of the ongoing first-class Quaid-e-Azam Trophy, as their disciplined bowling display allowed Southern Punjab a measly eight-run second innings lead with just three wickets intact on the penultimate day of the 10th fixture at the State Bank Stadium. Karachi. 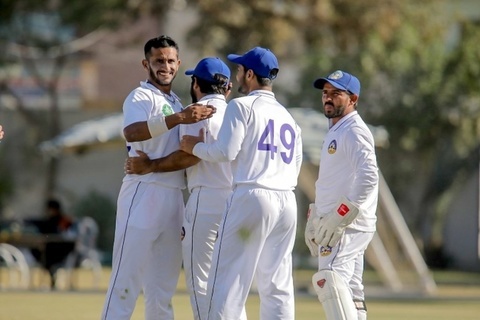 Central Punjab is on course to defend their title in the final of the ongoing first-class Quaid-e-Azam Trophy, as their disciplined bowling display allowed Southern Punjab a measly eight-run second innings lead with just three wickets intact on the penultimate day of the 10th fixture at the State Bank Stadium.

Central Punjab added six crucial bowling points, which took their bonus points tally from the match to 10, as they bowled out Southern Punjab for 187 and forced them to follow on.

Upon completion of the impending win, the Hasan Ali-led side will be granted 16 more points for an outright win which will see them jump to the second spot in the six-team points table. They are currently ranked fourth with 111 points.

With 128 points, Southern Punjab currently occupy the second spot and they have managed only one bonus point from the ongoing contest.

Their woes amplified on Monday when they could add only four runs to their overnight 183 for nine in reply of Central Punjab’s imposing 493 for seven.

With Southern Punjab facing a daunting 306-run deficit, Zain Abbas put a solid fight with 118 off 172 balls (18 fours and a six) but the opener failed to receive the desired support from the other end except for Salman Ali Agha, who made 79.

The destroyer-in-chief in the second innings was spinner Ahmed Safi Abdullah, who took four wickets for 98 runs.

Southern Punjab will resume their innings on 314 for seven with Saif Badar (17 not out) and Mohammad Ilyas (four not out) at the crease.

At the National Stadium, Khyber Pakhtunkhwa enjoyed a strong 272-run second innings lead over Northern, who were bowled out for 336 after starting the day at 180 for two.

Eighteen-year-old Mubasir Khan added two runs to his score before he was dismissed on 59 (seven fours).

Faizan Riaz, Mohammad Nawaz and Hammad Azam made notable contributions with the bat as they scored 42, 38 and 37 respectively.

Sajid Khan (four for 114) and Khalid Usman (three for 89) shared seven wickets between them.

Table-toppers Khyber Pakhtunkhwa were 87 for three in 30 overs after Israrullah, who followed up his century from the first innings with 35, and Sahibzada Farhan (38) put a 68-run opening stand.

Nawaz’s left-arm orthodox accounted for the wickets of both openers.

A Central Punjab win will perish their hopes of playing their second consecutive Quaid-e-Azam Trophy final as Northern will find themselves three points behind the defending champions even after winning the match.

Sindh were fighting to secure a draw after Balochistan forced them to follow-on at the UBL Sports Complex. They are still 11 runs behind Balochistan’s 414.

Batting second, Sindh were 208 for three at the close of play on the back of half-centuries from Khurram Manzoor, who was unbeaten on 82, and Saud Shakeel, who scored 90 off 175 balls and hit nine fours.

Earlier in the day, they could add only 35 runs to their overnight score of 160 for six before they were bowled out in 14 overs, which allowed Balochistan six more bowling points that took their bonus points tally to 10.

At National Stadium, Khyber Pakhtunkhwa elect to bat against Northern

At UBL Sports Complex, Balochistan elect to bat against Sindh