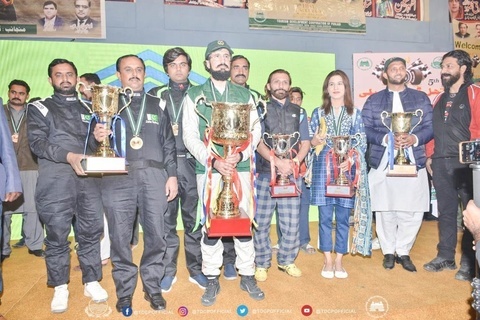 Ibrahim Shah hailing from Islamabad won the motorbike race which was included for the first time in 5th Thal Desert jeep Rally where 7.5 kilometer distance was kept for six motorbike racers.

The prize distribution ceremony was held at Faisal Stadium Muzzafargarh. The ceremony was attended by Racers Co Racers, Media and social circles. Mr Asif Mehmood Advisor to Chief Minister for Tourism and PHAs was the chief Guest.

The Advisor to CM thanks Chief Minister, Secretary Tourism and District Government Muzzafargarh for their support and cooperation for organizing Event.

He further thanked to Media, senior Racers, Female Racers, MD TDCP and his team and sponsors for organizing this event in a befitting manner.

All winning participants were awarded cash prizes and shields which were distributed by Federal Minister, Advisor to CM and MPA.