Southern Punjab has had an impeccable start in the tournament as they are languishing at the top of first-class Quaid-e-Azam Trophy points table. 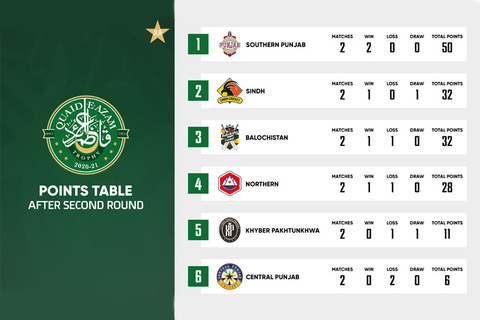 Following two riveting rounds of cricket across three venues in Karachi, the third round of first-class Quaid-e-Azam Trophy commences from Friday (6th Nov).

Southern Punjab has had an impeccable start in the tournament as they are languishing at the top of the points table. Shan Masood-led team has not only started with two wins in as many matches, which is already one more than they had in the entire previous season, they have also collected as many as 50 points from the two victories.

Sindh with 32 points is in second place on the Balochistan and Northern are at the 3rd and 4th place respectively.

Khyber Pakhtunkhwa is standing at the fifth spot with total 11 points and who have one loss and one draw in their two matches.

Central Punjab, the title defenders, has had two forgettable outings and, as such, are languishing at the bottom of the points table with only six points.

Let's have a glimpse at Quaid-e-Azam Trophy 2020-21 Points table After Second round: