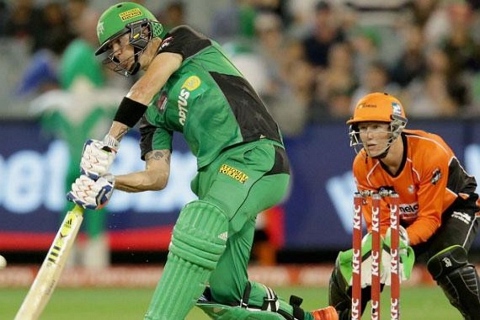 This was the second win for KP in three matches. Balochistan lost their second game in three appearances.

Zohaib (82) and Shehzad (79) struck their second consecutive fifties to guide KP to 246-8 in the stipulated 50 overs day-night game.

After deciding to bat first when Ahmed Shehzad won the toss, Khyber Pakhtunkhwa had a poor start as lanky Test pacer Umar Gul had the solid left-handed opener Fakhar Zaman (5) caught by Umar Akmal in the third over of the innings.

Rameez Aziz (10) also failed to assist his skipper when he fell prey to Bilawal Bhatti, held by Saeed Ajmal at short fine-leg. Rameez struck two fours from 17 deliveries. KP were 44-2 in 8.5 overs.

Zohaib and Shehzad (79) shared 75 for the third wicket. Skipper Azhar Ali took the prized scalp of Shehzad who was held at short fine-leg while attempting a sweep shot.

Shehzad, who hit left-arm spinner Mohammad Nawaz for a glorious four to complete his fifty off 51 balls, smacked ten fours in his knock.

Gul removed Faheem Ashraf (12), who attempted to pull a short-pitched delivery but the ball ended in the hands of Shahid Yousuf in the deep. Faheem hit one four from 24 balls. KP were 144-4 in 30.5 overs.

Bismillah Khan (20) provided good assistance to Zohaib but he also failed to handle a short-pitched delivery from Bilawal Bhatti and Babar Azam held an excellent catch at square-leg. Bismillah struck one four from 23 balls and KP were 177-5.

Off-spinner Saeed Ajmal had Musaddiq (13) caught by Umar Akmal, who covered a lot of distance in the deep. Musaddiq faced 21 balls.

Yasir Shah (15*) and Zohaib made good effort to inflate their total.

In the final over, Sohail Tanvir had Zohaib and Sameen Gul to restrict KP to 246-8.

The rest of the batting line failed to capitalise on the fine start and wickets kept falling at regular intervals with Babar sticking firm at one end.

In the next over, Zohaib got Babar to end Balochistan’s hopes. Babar wanted to cut the short delivery from Zohaib, but failed to beat Yasir who held it nicely at point.

Umar Gul (16) and Saeed Ajmal (23) entertained the fans before Zohaib had the former caught at first slip by Shehzad. Gul struck two fours from 36 balls. Ajmal smashed two fours and a six off Yasir Shah in his unbeaten 17-ball knock.

KP made three changes to the side that had beaten Punjab by two runs. Musaddiq Ahmed, Sameen Gul and Mohammad Asghar were brought in place of Younis Khan, unfit Rahat Ali and Hayatullah. Younis left the team on Saturday after a row with umpires during their previous match.

Punjab face Islamabad on Monday (today). Punjab, led by Shoaib Malik, have lost two matches, while Islamabad have one win from two outings.

Did not bat: M Asghar