Aaqib Javed has resigned from his role as the United Arab Emirates Cricket Head Coach effective May 31st 2016. 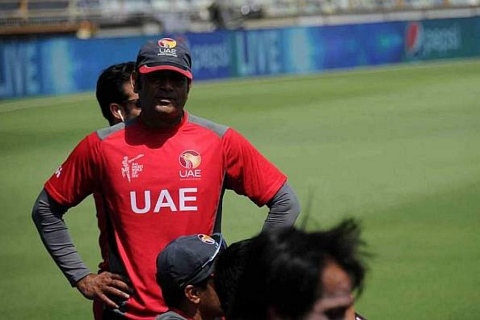 Aaqib Javed has resigned from his role as the United Arab Emirates Cricket Head Coach effective May 31st 2016.
Aaqib joined UAE Cricket as Head Coach in March 2012 and has experienced the successes of guiding the UAE to qualify for the 2014 U19 World Cup, the 2014 ICC World Twenty20 and the 2015 ICC Cricket World Cup, overseeing the UAE gain T20I and ODI status, as well as the recent qualification to compete in the 2016 ACC Asia Cup.
Emirates Cricket CEO David East said: "Aaqib has been a great influencer amongst the (UAE) players and coaching team during his 4 year tenure. He has been integral to Emirates Cricket senior mens appearance on the international stage at four high profile ACC and ICC tournaments, as well as our senior men's securing ODI and T20I status. We sincerely thank Aaqib for his commitment and efforts and wish him the very best with his future endeavours."
"I would like to thank the Emirates Cricket Board, its CEO David East, and the extended team for an exciting and rewarding 4 years. It has been a pleasure. We have experienced a very successful 4 years and I am very happy with the outcomes. I express very special thanks to the ICC Academy for their support and services (and) I believe UAE Cricket is very lucky to have the access to the world class facilities offered (at the Academy). During my tenure I have been fortunate to have worked with such great Associate cricketers; including Khurram Khan, Saqib Ali, Shaiman Anwar and many more. I see an exciting future for UAE Cricket and wish them good luck and I am really excited with the next chapter of my coaching career," said Aqib Javed.
Emirates Cricket will appoint Aaqib's replacement swiftly. "We will shortly announce the process for the recruitment of the Head Coach, and subsequently appoint an assistant coach." added East.