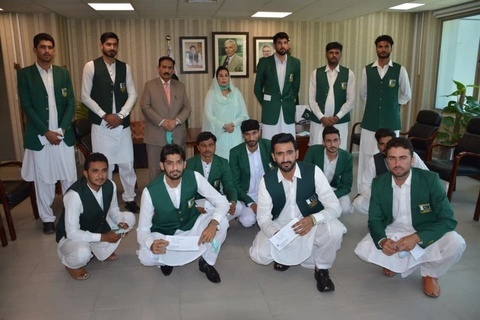 Pakistani athletes performed with remarkable skills at the 13th South Asian Games (SAG) all while without proper training camps and resources.

With their exceptional talent, Pakistani athletes participated in a total of 20 different sports out of 27 featured in the SAG 2019 where Pakistan finished its journey on the fourth position with a total of 32 golds, 41 silvers and 59 bronze medals.

Pakistan Men's Volleyball team was up against the rivals India with the Gold medal of Volleyball on the line in 13th South Asian Games where they ultimately fell short of their goal by 3-1 and had to settle for silver instead.


Men's Beach Volleyball team of Pakistan also captured a bronze by series of great gameplay displayed by Razzaq Muhammad and Waseem Muhammad who were against the host nation's, Man Bahadur and Dil Bahadur Sunar in the third position match, where the Nepali players fell by the set score of 2-1.

Total amount distributed among the volleyball players was Rs4.5 million. Pakistan Men's Volleyball squad comprises of top 16 players who are accompanied by two officials and Aimal Khan has led the Pakistani team at this regional extravaganza.

Dr. Fehmida, while appreciating the untiring efforts of sportspersons who brought laurels for the country, said it is vital to support them financially at this crucial time when the sports activities have been suspended worldwide due to the coronavirus pandemic.