Bismah Maroof played an invaluable innings of 53 not out to lead her side, PCB Challengers, to a six wicket win over Blasters at National Stadium Karachi, in the final of National Triangular T20 Women's Cricket Championship. 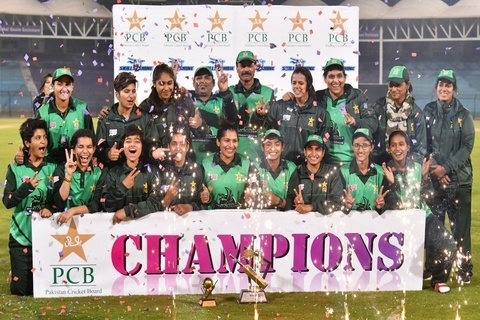 Bismah Maroof scored an unbeaten 53 to lead PCB Challengers to a six-wicket win over PCB Blasters in the final of the National Triangular T20 Women’s Cricket Championship at Karachi’s National Stadium on Thursday.
In a game played entirely under the lights, PCB Challengers chased down the 129-run target in 18.5 overs.
Bismah, who smashed five fours in her 46-ball innings, knitted a 61-run stand for the third-wicket with all-rounder Nida Dar (30 off 24) which formed the basis for her side lifting the trophy.
Challengers’ run-chase got off to a shaky start as in-form batter Muneeba Ali and Ayesha Zafar were dismissed for 10 and 11.
However, a strong third-wicket partnership between Bismah and Nida denied any further inroads to the Blasters’ bowlers.
Blasters’ captain Ramin Shamim took two wickets for 24 runs in 3.5 overs, while Anam Amin, the leading wicket-taker in the tournament with seven wickets in five matches, and Natalia Pervaiz picked up a wicket each.
Earlier, Blasters had managed 128 for seven in 20 overs after Ramin won the toss and opted to bat.
Javeria Khan, opening with Ayesha Naseem (11), provided a solid start by scoring 43 off 35 on the back of five fours and two sixes.
Wicketkeeper-batter Sidra Nawaz was the other notable batter in the innings with 20 off 16 balls.
Blasters’ opening pair added 51 runs before the partnership was broken by left-arm off-spinner Sadia Iqbal.
For Challengers, Saba Nazir took two wickets for 22 runs, while Aroob Shah, Sadia, Fatima Sana and Aimen Anwar picked up a wicket each.
Bismah, for her match winning knock, was named the player of the match.
The player of the tournament honours went to Muneeba. The opener was the highest run-getter with 292 runs with staggering average of 58.40. The 22-year-old scored a century and three half-centuries in her five innings.
Scores in brief:
PCB Blasters 128-7, 20 overs (Javeria Khan 43, Sidra Nawaz 20; Saba Nazir 2-22)
PCB Challengers 130-4, 18.5 overs (Bismah Maroof 53 not out, Nida Dar 30; Ramin Shamim 2-24)